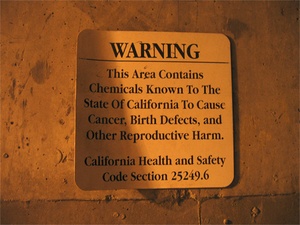 This sign is located at the Memorial Union parking structure.

Around Davis (and throughout California) you can find signs with warnings about cancer and birth defects.

They are a result of Prop 65 which passed in 1986. Take the time to read the FAQ if you have questions about why one of these signs might be posted.

You can also read more about signs in Aggie columnist Michael Giardina's column.

There are also warning signs in Davis with illustrations of people getting smashed by gates and running away from a fire!

2007-05-30 22:57:42   Beware of vicious Gate Arms! My minimal Spanish ability is pretty sad (I took 4 years), but I see some spelling errors on the sign at the West Entry Parking Structure. The Vicious Gate Arm photo should be submitted to: http://www.flickr.com/groups/stickfiguresinperil/pool/ —Jedron

2007-08-09 12:13:55   What is really amusing is that the signs occasionally appear on goods outside of California, which makes California look odd. A bar conversation amongst a group (most of whom had never been to California) figured the signs aren't needed elsewhere because it is generally known outside of California that drinking nail polish remover and sucking on tailpipes is bad for your health. To a certain extent, it links California and chemical hazards (or witless dangerous behavior) in some people's minds. —JabberWokky