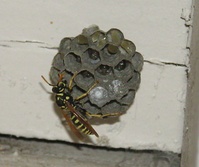 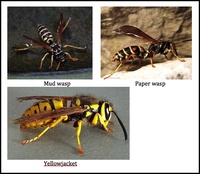 Technically, wasps are any member of the order of insects called Hymenoptera, that is not a bee, or ant. They don't make honey. They are just wasps and do waspy things. This includes the commonly recognized paper wasps as well as yellow jackets (both in the narrower Vespidae family) and mud daubers, and many more obscure types. Most members of the Vespidae have a worker caste and form annual colonies which last for just one summer. The queens (or egg-laying females) are much larger than the workers, but both queens and workers have a poison-sac and retractable sting at the tip of the abdomen and can sting when agitated.

The bright yellow and black striping of wasps serves as a warning to prospective predators that the insect is venomous and should be left alone. This yellow and black coloring is copied by many insects that are actually harmless and have evolved the coloring because of the deterrent advantages of appearing 'wasp-like'.

Wasps are actually considered beneficial by many, since they do not cause any structural damage, prey upon pest insects such as spiders and aphids, and though they look scary they are actually not particularly defensive of their nests. Mud Daubers in particular are known to only very rarely sting, even if directly harassed.

Paper Wasps: Belong to the genus Polistes. They make paper-mache nests on largely exposed overhangs, such as eaves or branches. There are two local varieties which behave essentially in the same manner: Polistes Dominus —the "Common Wasp" or "European Wasp"— has black and yellow stripes that are bright and distinct like a construction vehicle; Polistes Aurelius —the "Golden Umbrella Wasp"— is slightly larger and has yellow and orange stripes. Despite the names, this author thinks the Golden Umbrella wasps are actually more common locally than the "Common Wasps." 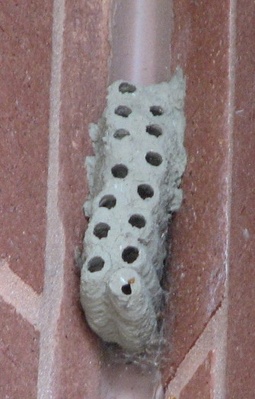 Mud Daubers: Make small mud nests under eaves or within structural cavities. They are large, and are black with some yellow markings or are a bright iridescent blue. They have amazingly narrow waists. These wasps gather dirt and mix it with their saliva to create a series of long cylindrical cells on a flat surface, and place an egg inside each one, along with several paralyzed spiders or cockroaches. As noted above, stings from these are exceedingly rare. They are happy building nests on walls and under overhangs on residences, although some people (and landlords) knock them down, possibly due to a misconception that they could be stung.

Hornets: do not live in Davis. There is one species of hornet that lives on the East Coast of the United States, but otherwise there are no hornet populations within hundreds of miles of California. Some people however, insist on continuing to call wasps around here hornets for some reason.

When seen, wasps are sometimes mistakenly referred to as bees. Beekeepers loath the confusion. The Davis Food Co-op recently had a wasp nest in front of it, and they posted a sign that said to look out for the bees!

Wasps prefer locations with ample supply of water. Frequent outbreaks of wasp nests are often a symptom of an overwatered lawn.

If you are being bothered by foraging wasps while eating a picnic out, try putting a "sacrificial" piece of food at least 15 feet away, and the wasps may leave you alone. If they don't, then pick up and move elsewhere, leaving the sacrificial food behind. They navigate by landmarks, and it will take them a while to find where you moved, and their attention will turn to the food you left behind.