If you recently moved to Davis, it is important to remember that weather is relative: everybody has different comfort levels. Davis has what is called a Mediterranean climate, which exists in few places other than near the Mediterranean Sea. This means that we experience cool, wet winters and hot, dry summers. The heat drives people nuts in the summer and the rain and fog* drives them bananas in the winter. That's why California's full of fruits and nuts. Spring and fall are great, though.

Make sure you check the time to make sure the data is current.

Davis summers are hot. High temperatures average in the upper-80s and low-90s (31-33°C), with many days below and many days above that. Heat waves occur when a high pressure ridge builds over the Sacramento Valley or the Great Basin and remains in place for a couple of days, pushing the temperature well into the 100s (over 38°C) during that span. Typically after two or three days, a low pressure front pushes in from the ocean and the delta breeze returns, and high temperatures drop into the mid to upper-80s (28-32°C); the record number of days in a row over 100°F is eight. In an average summer it reaches at least 100°F on 15 to 20 days. With all that said, the summer heat in Davis is made tolerable by the very low humidity (usually in the 15 - 30% range) and cool nights.

We almost never get summer thunderstorms and there is virtually no rain at all during the summer. The nicest thing about summer in Davis is the night time. The city's light ordinance is finally appreciated, as people can now enjoy the night sky. It's still warm out, pleasant for hanging out or a late barbeque, enjoying cool drinks, even outdoor activities (glow in the dark frisbees anyone?). The average low temperature for a July night is 57°F (14°C), typically occurring past 3 or 4 a.m. Although sleeping at night can be comfortable despite a very hot day, sometimes night temperatures in summer are still in the low 70s (21-22°C) at 8 or 9, even (rarely) up to 10 p.m. 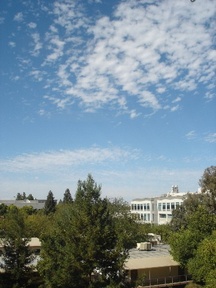 Four out of five farmers agree, fall is the best season of the year. However, it often remains hot in Davis in September, and even into early October; nevertheless average temperatures drop like a rock thereafter, reaching only about 60°F (16°C) by Thanksgiving. The first significant rain typically arrives in November. Notable concomitants of the season are trees that sport leaves of brilliant red, orange, and yellow. Pumpkins pop up in the usual locations as well; at the outskirts of the city, at the Farmers Market, and of course, on people's doorsteps. This is the best time of year to arrive in Davis as a student because the weather brings everyone outdoors; student organizations are recruiting left and right; and there are lots of freshmen and transfers who are just as bewildered and disoriented as you are! 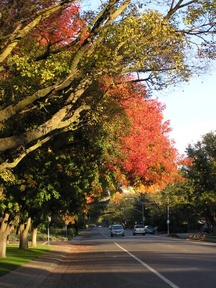 Many of the trees in Davis put on a colorful show during fall. 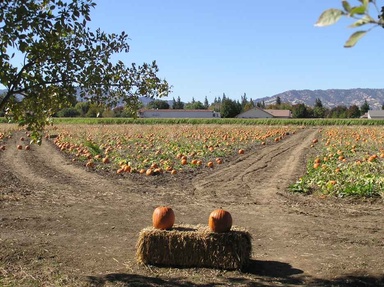 A pumpkin patch on the west edge of town.

Davis winters can be quite chilly but are very temperate by national standards. Average highs are in the mid-50s (12-13°C) in December and January, while February tends to be a little warmer in the low-60s (16-17°C); average lows are in the upper-30s to low-40s (3-6°C). Frost often occurs on clear, calm nights, and there's usually one very cold night per winter when the temperature plunges down to the 23-28°F (-5 to -2°C) range, or so. There is often a lot of fog which warms things up a little, but winter is basically the wet season in Davis; indeed, 72 percent of the mean annual rainfall comes from December through March. The rain is normally light or moderate in intensity, but occasionally can be heavy. It can also get very windy and, combined with the rain, that can be difficult for cyclists. If the trees haven't already lost their leaves during our brief fall season, they lose them now. Major freezes occurred in December 1990, when temperatures dropped into the mid-teens (F), December 1998, and January 2007. These killed subtropical plants and damaged the citrus crop throughout Northern California.

When El Niño is in effect, there is typically more rainfall and snowfall due to the warming of the Pacific Ocean. The 1982 El Niño brought us one of the snowiest and wettest winters on record for the state. 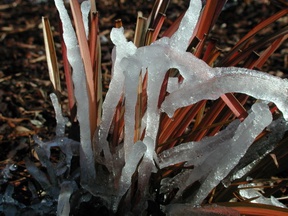 Beware of the wind and rain...

...for they may cause trees to fall on your car.

Spring is perhaps the nicest time of year. It's essentially the inverse of fall, starting cool and wet and ending warmer and drier, but the Delta Breeze usually keeps it from getting too hot; temperatures range from the 60s to the 80s (16-32°C). In April the rains taper off significantly, and by mid-May the chance of rain is almost null. The plants are very green, and The Quad is somewhat less muddy. You'll find many parts of Davis to explode with spring flowers. Not surprisingly, those with allergy problems will begin to suffer with the coming of this season, as the Central Valley of California is infamous for being a death pit of allergies.

2008-01-04 08:25:29   This has been the craziest Davis winter storm I can remember! This morning when I was going to work I thought there was NO WAY I was going to walk from my usual spot thatis a ten minute walk to GBSF.

So, I decided to park as close as possible to my building in the lot and make a run for it. This was after the parking permit machine would not take my cash; it would recognize it because it was so wet. When I got the wind knocked me back against the car.

When I made a break for it I was completely soaked by the time I ran the 50 feet to my building. The building is like a wind tunnel and as I was running, it felt like I was on a really wet and windy treadmill. My hood blew off my coffee was half gone by the time I made it inside. I also called TAPS to let them know why I did not have a permit. They were really nice and said they would get alot of calls like mine and if I was cited, to bring my citation into TAPS this afternoon and pay my $6 then.

- Observation by Constantia Oomen, at the start of Fall 2017 (September 28, 2017): Summer 2017 has been by far! (since May 2017 in fact already) the most uneventful Summer in the last 6 years time. Personally, I would call it  very "boring". There literally wasn't anything but sunshine and (very, more than average) high temperatures. There was no wind of any substance, there hasn't been any storm, any thunder, any fog, any whatever. I counted a few astray raindrops on September 4, 2017, but that lasted for about 1 minute, so it was like nothing at all. So yes, I would call this extreme weather because of the total lack of any weather change. Think of the very extreme weather types in Texas and Florida lately and in many other places this year, and you could call this strange. Northern California seems to have be forgotten by the "Weather Gods". Please note that I am comparing to the last 5 years (2011-2017) in Davis; I have been around here all the time and cycling tons, so I really can tell.

- Observation by Doug Walter: I don't find personal opinions interesting on a page like this BUT I would note that on June 11, 2017, there was a thunderstorm which dropped about a quarter of an inch of rain in less than one hour; wind gusts were measured at 18 MPH in Chestnut Park, and the temperature dropped over 10 degrees, and then rebounded. If Ms. Oomen had been on her bike, she wouldn't have called it "boring."

*The fog seems to be a thing of older days, before long-time drought set in, because there wasn't any remarkable fog since 2011. Observation by CO.
What is "remarkable?" There's fog today (Jan. 13, 2018); there was fog yesterday; there is often fog in the winter, but it isn't "remarkable," like London pea-soup fog, just a part of the routine late fall and early winter weather (which is the topic of this page).