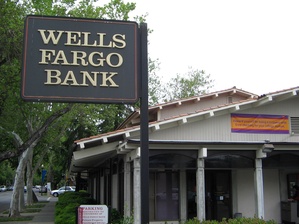 Wells Fargo is a San Francisco headquartered bank with one branch in downtown Davis and in both of the Safeways. The two Safeway branch hours are 10am to 7pm Mon.-Sat. . The Downtown/In-store branches are closed on Sundays. (ATMs are available 24/7). There is a Wells Fargo ATM next to the MU computer lab.

Warning Major Changes: Customers Will No Longer Be Able to Sue Wells Fargo or Engage In A Class Action Lawsuit

On February 15, 2012, Wells Fargo is changing their consumer agreement so that customers will be forbidden from suing Wells Fargo or engaging in a class action lawsuit against Wells Fargo.

You might want to think about changing banks since you will be at the mercy of whatever Wells Fargo decides to do with your money after February 15, 2012.

Note that arbitration clauses are extremely common these days. Waiver of the right to class action suits is a new beast arising from a 2011 Supreme Court decision.

In 2003 a couple living in Africa lost their life's savings in the local branch due to a case of identity theft. At first the bank refused to do anything about it, which caused a local uproar. Reportedly, many locals took their money out of Wells Fargo in protest. The case has since been settled to the satisfaction of the couple.

Wells Fargo also owns a small strip of parking next door to Jack In The Box and enforces towing both for the strip and for the main parking area. The towing company they use is located in Vacaville and has fairly steep rates for towing and storage. Parkers beware.

2007-08-26 16:16:57   Don't use the Safeway location on Cowell, they penalize their customers for their own computer problems. On Monday, I deposited a check in my bank. By the next week, I found my account locked with huge overdraft fees. When I called to complain, I found they never credited my account with the check I deposited, because they had "computer problems". They refused to refund my overdraft fees, and were very rude and suspicious about the whole thing, like I was trying to scam them.

2008-07-06 02:58:29   Don't work with the Indian women she is useless. They were having computer problems when I was trying to open a new CD and she just kept giggiling when the computer would misplace my money. WAY NOT COOL. Who laughs when we are talking about misplacing THOUSANDS of dollars. —SeanMartir

2009-03-09 18:33:18   I went in to the Safeway location make a transfer and the banker insisted that I upgrade my checking account. Ok, fine. She ordered me new checks, which finally came two weeks later. I had thought she would use the information from my old account, like they usually do. Turns out they sent the wrong pattern, the wrong type of checks (duplicate instead of single), put my dad's name on them and used the wrong address. I even had a whole conversation with the lady about the check pattern I would like! She also told me that a new card would be coming. When I called the call center to fix my checks, they told me that a new card was never requested!! I guess it's a good thing I called, or I wouldn't have gotten an ATM/debit card for my account! I have been a customer there since 1991 and they generally impress me with their customer service. This time was certainly an exception. —MeganCleary

2009-07-21 13:07:02   I have wasted my 4 four hours to open a simple saving account. After four hours, the lady told me everything is just fine. Apparently the lady made bunch of typo on my account and they sent all my information to another address. I have wasted another 15 minutes on the phone to correct my mailing address.

the lady also could not placed my SSN to my account so I have wasted another hour in the bank for the process. She -AGAIN- called me to the branch for more paper work. She also scolded me and my spouse when we questioned her why it takes three months to set up simple saving account.

The lady is very rude, very unprofessional and useless at 340 F st location.

2009-08-15 17:59:05   Been pleased the past month! We have transitioned to Wells Fargo this summer, and had the opportunity to try every location (even the 2, yes TWO, atm's at UCD = no lines!) Set up extra 'goal' savings acct's for our family and child. Every person has been courteous and professional. The envelope-free atm's that scan checks and cash are wayyyy better than at our old bank—very cool. Online services very useable; 1-800 call made for a question was also smooth. One hitch (certain to be resolved / waived): as new customers, didn't realize we'd have a $1 fee to print-out an atm "record of the past 10 transactions . . . " Maybe we'll just phone in toll-free . . . overall, great services and tons of locations sold us. A+ keep it up! —JasonBundy

2012-10-15 20:32:40   Do not go to the branch in the south davis Safeway. At first I was impressed with the seemingly good service they promised me- they opened a credit card for me and offered a higher percentage cashback program and free checks. But it's more been more than 6 months, and I've called and visited that branch multiple times but I never received my checks or the higher cashback. The promises were empty, and the bankers were either unhelpful or irresponsible in their handling business. I do not recommend Wells Fargo any longer. —gpark