Located on Hutchison Dr. next to the Life Sciences Addition, the structure will be six stories high and will be the largest parking structure on the UC Davis campus.

"The West Entry Parking Structure project for the UC Davis campus will hold 1,453 spaces and include a 20,800-square-foot office building to house the Transportation And Parking Services and UC Davis Police Department public safety programs, including a new emergency operations center. The parking structure has been proposed to accommodate recent increases in student enrollment, faculty and staff employment and campus visitors. Construction will begin in January 2004 with completion expected in November 2005." (source)

A (California Aggie) article reported that the opening of the structure was delayed until mid-March.

Oh god the building just keeps going when will this madness stop.

Third story is up, with work progressing on structural supports for the fourth floor.

The ramps are taking shape and the east end has risen almost in to the first story in height.

The entire old parking lot has been removed and many supporting beams have been erected. The foundation looks like it's being built. The construction information sign was moved since the last update, likely due to the vandalism of the sign that took place. 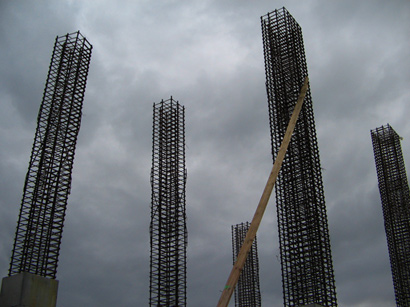 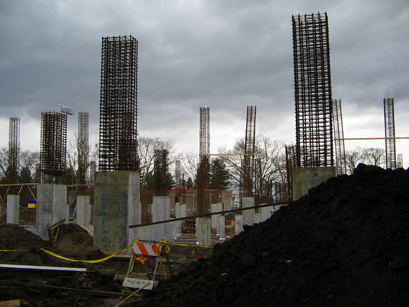 It was an especially gloomy day when these photos were taken, and the construction site had an apocalyptic feel to it.

Streetlights have been removed, fences have been erected, and one piece of machinery stands pitted against the asphalt in the ultimate quest towards justice and parking for all.