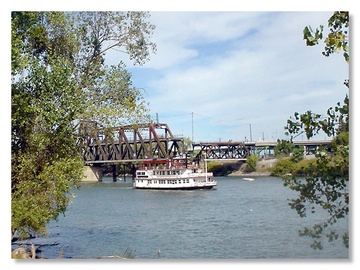 The I Street Bridge, connecting West Sacramento to Old Sacramento, swivels to allow boat traffic through. 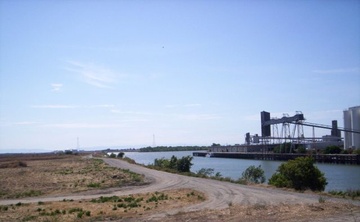 The Port of Sacramento viewed from Lake Washington Blvd. 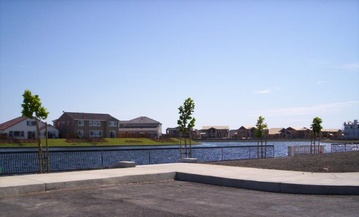 Homes located in the upscale Bridgeway Lakes development, part of the Southport neighborhood

Long an industrial and working-class area, West Sacramento is experiencing a transformation as a modern, diverse, and liveable city. It is recognized as a leader in implementing smart growth principles and as a desirable setting for infill development given its location at the heart of the region. The community's main drag, West Capitol Avenue, was part of the Lincoln Highway. In years past, hookers and drug dealers plied their trades along West Capitol, but since its incorporation West Sacramento has embarked on a series of community improvements due in part to redevelopment and an influx of new residents attracted to large housing developments south of the port. The community is diverse and includes large subcommunities of Sikhs, Russian immigrants, Asians, Latinos, Indians and bikers.

Currently, Raley Field and the Ziggurat Building are the city's most visible structures, and though built by The Money Store, the Ziggurat now houses the State of California Department of General Services. West Sacramento is also becoming home to "big box stores" such as The Home Depot and Ikea. For students, Denny's is a late night attraction, only about 7 miles from South Davis.

In 1963 the Port of Sacramento opened up, allowing many agricultural products (mainly rice) to be shipped directly to foreign markets, rather than transported via road or rail to the Bay Area. The Port of Sacramento also hosts the swimming leg of Davis' Californiaman Triathlon, the Davis Sailing Team at UC Davis and the UC Davis crew team.

In 2006, Mayor Christopher Cabaldon announced during a "state of the city" dinner that he identifies as gay. The announcement is the subject of a new documentary to air on MTV networks, including the GLBT television network LOGO.