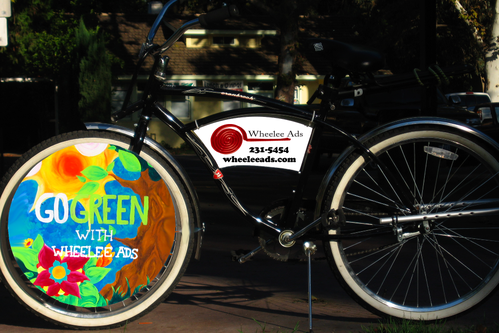 Wheelee Ads is an advertising company and potentially the most visible way to advertise in a small college town like Davis. Your Wheelee advertisements are mounted onto their riders’ bicycles before each day and they ride your advertisement around the City of Davis. With all the bicycle and foot traffic in this city, thousands of people will see your advertisement every week.

They are committed to promoting local businesses and organizations in an environmentally safe manner at a fraction of the cost of other advertisement mediums. One of their goals is to alleviate paper usage in the Davis area by promoting businesses with reusable industrial plastic signs that are attached to student bicycles and displayed around the city. They have an in-house graphic designer to help (free of cost) you with your unique Wheelee Ad designs and use a 4-color digital printing process that allows for any design to be made. 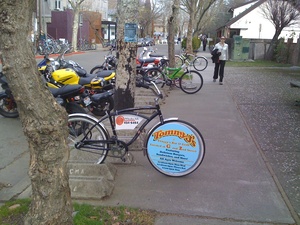 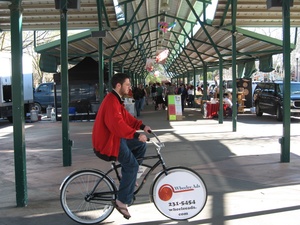 2008-01-10 21:56:37   Yes it is1. The bit in the center is, at any rate. The font is antialiased on a pixel perfect x axis, and the background is purely maximum white with zero deviation across the entire panel. In addition, the font and logo displays no CCD noise or JPEG compression as the rest of the image (say, the background) does. I have no problem with a mockup (and it is possible that the rest is real, including the wheel ad; I have not examined it), but that image is clearly a mockup or retouch done in a photo editing program. (And there's really nothing wrong with that, in my mind at least). —JabberWokky

1. And of course, by 'photoshopped', I am using the common definition of 'a mockup or altered photograph edited in any image manipulation program such as the GIMP or Paint Shop Pro'