The White-tailed Kite (Elanus leucurus) was almost made extinct in the 1930s and 40s due to egg collection and shooting. They can be found in many Western States south to Central and South America. In California, the kite is especially common in the Central Valley, Central Coast and the Bay Area. These kites prefer open grassland and can often be seen hovering over a region looking for prey; a behavior unique to only a few raptor species. As a result of their behavior and appearance, these birds are often confused with gulls. A good place to spot a kite is along Highway 113 between Davis and Woodland or the surrounding farmland beyond the city limits. They've also been spotted on Cowell between Pole Line and Chiles Road. 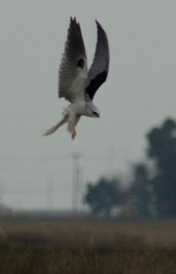 A White-Tailed Kite in Davis 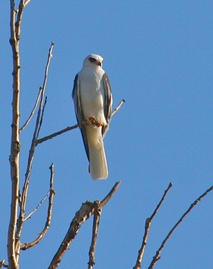 A kite near Pedrick Road 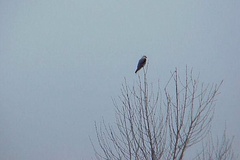 A White-tailed Kite from the Central Coast.