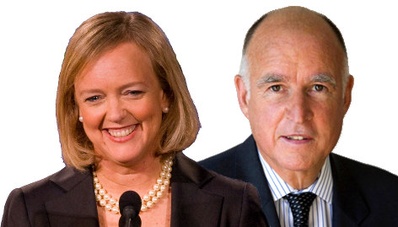 UC Davis hosted the first of three debates in the race for governor on Sept. 28, 2010. Democratic candidate Jerry Brown and Republican candidate Meg Whitman came together on stage at the Mondavi Center for an hour-long event that was broadcast live on TV, radio and internet feeds. Tickets were made available to local attendees via a lottery.

Due to the large number of press attendees, from 4pm to 12pm midnight, Mrak Hall Drive (between old Davis Road and Mrak Hall) and Alumni Lane (on the north and east sides of Vanderhoef Quad, in front of the Mondavi Center) were closed.

The afternoon before the debate, Jerry Brown took some time to run a few laps around the track at the ARC.

Both Brown and Whitman supporters were demonstrating outside the Mondavi before and during the event.

One of the questions was from an unidentified UC Davis student (posed by Capital Public Radio’s Marianne Russ), asking whether the candidates would roll back funding cuts to the UC, CSU, and community colleges from recent years.

Brown's reply: "Not in my first year, with a 19 billion dollar deficit. We have to get real here. I certainly don't want to see them go up...I'll hold down the fees the best I can, but we're in a tough plight, and we're all going to have to sacrifice. But I'd say those at the top, those at the commanding heights of our economy, should tuck in their belts first...Look I'd love to roll back the fees. I'd love to have a freeze, but that would require either the university becoming a lot more efficient than it is or the state finding billions of dollars that it doesn't yet have. One way or the other, we're going to protect UC."

Whitman's reply: ""I want to reduce costs of this government and take a billion dollars and put it back in the UC system... Every day I talk to children who are at UC who have to take the semester off. I ran into a young man the other day who couldn't go back to UC Berkeley because fees had gone up by 32 percent and his father had lost his job... We have got to reform our pension program. We have to reform our welfare program... I've got some very specific plans to reform welfare; take some of that savings and put it back into higher education." She promised a billion dollars for higher education over the next two or three years, but would leave it to "the Chancellors" to determine how to best spend the money (on faculty, research, reducing fees, etc.).

Evidently, Whitman thinks that the people attending college are children...

Student Housing planned "a couple" viewing parties, but only publicly announced one. The one open to all UC Davis students was located in the main room of Tercero commons and was held from 5pm to 8pm.

The Center for Leadership Learning hosted a viewing party for undergraduates, from 5:30pm to 7:30pm in the Community Center (Building 180) at The Colleges at La Rue.

Campus Unions announced that it would host a viewing party in the ArtLounge on the second floor of the Memorial Union.

The Graduate School of Management hosted an invitation-only party for their members.

Off campus, the Davis College Democrats planned to gather at 5:40pm for a viewing party at Bistro 33.