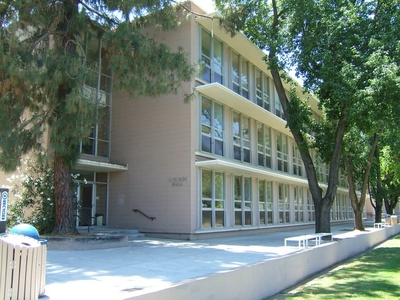 Wickson Hall was named for Edward J. Wickson and was built in 1959. It currently houses the departments of Environmental Science and Policy, Pomology, and the graduate group of Ecology. Until July 2008, Wickson was home to the Department of Viticulture and Enology. The hall is better known for its Teaching Winery and Wine Cellar. The cellar holds over 250,000 bottles of wine. A ride in the freight elevator is one of the best sensory experiences on campus. It is also rumored that there may be a secret passage connecting this wine cellar with Lower Freeborn.

Around 2002 there was an electrical fire in the building which caused a massive buildup of smoke throughout the building. Once the fire alarm went off, students were seen frantically running through the halls in a less than orderly evacuation.

A view of the north side from North Quad 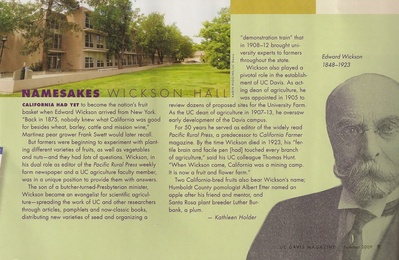 Wickson Hall was featured in the Summer '09 UC Davis Magazine