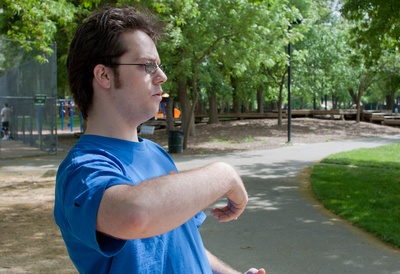 Daubert conversing with CovertProfessor (cropped out for anonymity)

The next Wiki gathering will be Saturday, May 7, 2011, at 2pm at Slide Hill Park! You should come. Yeah, you. It's a potluck, so bring some food and/or drinks. And some friends!

(Why, oh why, is this on Whole Earth Festival Saturday??)

Gonna make it? Add your name! If you know what you're bringing, note that, too! Options include food, drinks, charcoal (don't forget the matches/lighter; match-light briquettes are a plus!), cups + plates + utensils.

People who wish they could come

It was great success Folks were met in person, discussion was abound AGTV showed up and took some interviews Habanero Jack was well received! Hot Dogs, Sausages, burgers, salads! The highlights were "Those are on the wiki?!" in response to me complementing TG on his beer photos and Cover Professor made a cameo! Also during the bbq a HUGE 6-8'' branch fell from a tree that was roughly 70 yards away! When it hit the ground an owl flew out! Nuts! o

I actually enjoyed meeting the folks that I have had some rather hostile interactions with!!! They all behaved (SURPRISE!!) rather docile and polite in person..... —JoshLawson

Definitely good to meet you. —tg

It was a good BBQ, saw a lot of editors I knew and met some new ones. Enjoyed chatting with CovertProfessor. We need to not wait so long for the next one. —JasonAller

I was especially impressed by CovertProfessor's hand stands! I was glad to be in a select non covert group. It was great to meet you others that were still there! —BruceHansen

It was well worth the long drive to meet all you people. I really should try to make it out to Davis more often. —MikeIvanov

Sad I missed the fun guys but if you watch season Five of the guild you'll see what I was up to instead. I have one more scene to fill in on before heading home from LA! no lines but lots of fun being background and occasional foreground! Plus I met SO many scifi people doing cameos!!!—OY

I hate to have missed this, but the date choice could barely have been worse; I'm surprised anyone showed up. —SteveDavison