The arrow and circle logo for the wiki is designed to evoke the signs for bike circles and roundabouts that are littered about Davis. The logo often changes for holidays. Upload a logo here for an upcoming holiday and it will be used! Don't worry about formatting or other technical details, as it can be converted into something that works. You also might want to leave JabberWokky a message, especially if it's a last minute upload.

This is the very first logo used on the Davis Wiki. It was used along with plain text.

It was supposed to remind you of the signs for bike circles and roundabouts that are littered about Davis: 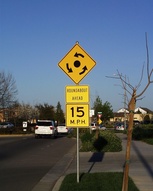 This logo was designed for the new theme:

In my opinion, this logo looks better with a tag line:

Thanksgiving 2005 (kind of a half-assed attempt)

As of 4:28am when the official results were read

Homage to our beloved Cafe Roma (closed in February 2007)

That odd beehive hairdo thing is actually a fingerprint and was the Picnic Day 2007 logo.

The tree is from the Project Sycamore Wiki, and is the logo of the software this wiki runs on.

Elements from the GLOBAL pumpkin carving photo and NASA.

JabberWokky is trying to include more holidays from different cultures found in Davis. If you have an upcoming holiday you know of, please upload a logo (and include a date)!

As they are overlapping holidays this year, Christmas and Chanukah should probably share the logo

If you'd like to make a logo for the wiki, just upload it to this page sometime around the date of a holiday. If it's good we'll throw it up as the logo.

This one was a brainstorm idea that made PhilipNeustrom piss his pants:

Here is another logo idea, featuring a water tower (which was rejected because it looks like some kind of jelly fish) Maybe an alien landing craft?:

Here is a takeoff on the "Welcome to Davis" sign: 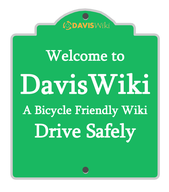 Plain version of the sign on the Front Page. That one is severely touched up in GIMP. Grab a PDF here.

What do you think about the logos? Any ideas?

2004-08-01 18:48:18   Sorry about that. You see, at my high resolution, it's hard to fathom there won't be room for something on someone's screen. But I'll take it off for now until we figure out if it even belongs anywhere. - MikeIvanov

2005-03-17 17:34:59   i saw that Berkeley wiki page right now < http://www.csua.berkeley.edu/~tobin/wiki/moin.cgi > and you guys at Davis Wiki have beat them up hands down. That's awsome that we are actually better than Berkeley at something. Long live wiki! —GeorgejAndrews

2005-10-12 22:35:44   I love "A Davis resource that doesn't suck" and Rob's "Edit this T-shirt". I think black on white would be better, to be like the black on white text of the Wiki. I like the 'roundabout' logo, it's like pages being endlessly re-edited/recycled, I say keep it. —SteveDavison

I liked it! Too bad it was only up for a short time and few saw it. —PhilipNeustrom

I put up last year's for today. If anyone's got something better (or in the future, if you want something) then please throw it up! —PhilipNeustrom

The 2007 Picnic Day Logo. It's a weird, altered fingerprint thing. I figured I should include it. See Picnic Day 2007 for a larger version. I'm up for removing it, though. —JabberWokky

I didn't know what it was, either. I don't think many people will recognize it, even if it's the official logo. Something to the left in that logo would be good, though. Maybe even the water tower? (old town feel, etc?) —PhilipNeustrom

In the layered original I named that layer Beehive, as it reminds me of a Beehive hairdo. I agree, and if nobody else edits it by Saturday, I'll change it myself, but I'm hoping somebody kicks in their own variation. I uploaded the psd file for it (made in Gimp, I assume Photoshop, Gimp and Paint Shop Pro can read it). It's in the files for this entry named "Picnic 2007.psd": Picnic 2007.psd —JabberWokky

Maybe for the WEF you could make one that uses the Daviswiki logo in the place of the little recycling arrows that are on the bottom of plastic bottles and cans. I would do it myself but all I have is Paint program and OpenOffice Draw. — MaryLieth

I need some help making the two i's look more like tiki torches.

2009-02-18 21:24:43   Hello, fellow Daviswikians. It has been a while, but recently since moving to Ithaca NY I have been working on another wiki http://ithaca.wikispot.org/. Anyways I was wandering how you guys designed the logos. Im a total beginner, and the general wikispot page on logos seemed to be more about concept ideas, rather than how to actually make the logo. Thanks

Do we have a larger version of the main logo?

2011-11-15 17:43:36   I propose we participate in American Censorship Day tomorrow. Wikipedia is participating and the legislation threatens the future of DavisWiki and sites like it. What do ya'll think? —PhilipNeustrom

Update: There appears to be a coordinated internet-wide blackout planned for Jan 18th. Wikipedia is considering a full site-wide blackout. Should we join in and put the logo up as we did before? This isn't a theoretical here, either — both Boxer and Feinstein are co-sponsors of the Protect IP Act. —PhilipNeustrom

2011-11-15 21:36:30   There are certainly plenty of students on the UCDavis campus who need help navigating a roundabout. I've had to yell at a few people... —ConsciousConsumer