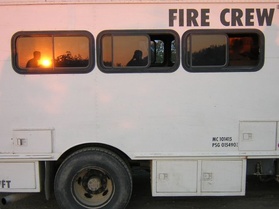 Wilbur Wildland Fire Transport is one of several crew-transport companies that provides the U.S. Forest Service with transportation for seasonal firefighting crews, such as Davis Fire Crew (which is closely affiliated to WWFT). Similar to the way seasonal firefighters are on-call, drivers are on a rotation and are dispatched as contract drivers for the term of the dispatch, which is the usual two weeks. However, drivers can be switched out (though perhaps inconveniently depending on where the crew is working in California) for part of the dispatch if there is an overlapping commitment. 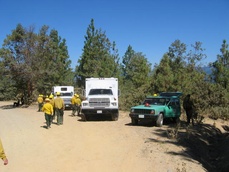 Project work site Drivers are provided with the option of a per diem rate, though that seems extremely rare. This rate is something on the order of $90/day to cover food and lodging, but the rate is provided to the contractor—not the operator—and if ANY food is received, the rate is cut in half (i.e., that sandwich would have cost $45). However, it doesn't seem to have happened that anyone was offered this per diem anytime recently. The usual setup is far more cushy: Drivers are provided with 3 meals daily (usually bag lunch and breakfast/dinner out), and whenever the crew is in an area with hotels/motels close by, a real bed with a real bathroom and real running water. And electrical outlets. For recharging things. One does not want to be out on a dispatch without a fully-charged phone and MP3 player. 'Course, you could also be sleeping out in the boonies, eating MREs (it says "Meal, Ready-to-Eat," but it's more like "Meal, Rarely Edible"), without a shower for 14 days. Get used to it. And bring your own sleeping bag rated to AT LEAST 30ºF. (Anything less-warm and you will definitely freeze yer ass off.) 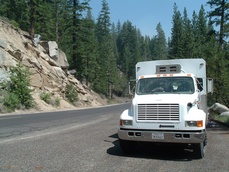 International 4700 in the Plumas NF Current driver wage is $150/day (before taxes), with, as mentioned above, meals and lodging included. Drivers are responsible for performing full DMV pretrip inspections on their vehicle each morning, which, of course, includes checking fluids and tire pressure, and performing all seven brake checks. Given the extremely rough/uneven/dusty/gravelly off-road conditions on which the trucks frequently travel for both fire and project work, the truck being in pristine operating condition with safe brakes should be the absolute last thing to worry about. A 10-to-15-minute inspection is definitely worth the trouble when going down steep grades and other, well, crappy roads, especially with 9 to 11 fire crew passengers to keep safe.

This job requires a B-class license with passenger and air-brakes endorsement, and drivers must be able to drive a manual-transmission truck that may have a split-shifter. So Unitrans drivers who can drive stick.

If you are a nature buff who likes road trips—and being paid to take a scenic route—this may be the job for you.

And bring a camera. 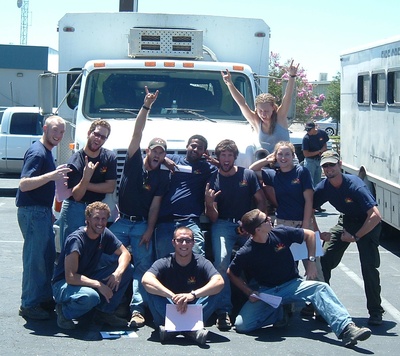