There were twenty-three Senate Candidates running for 8 spots, rather than the usual 6. The two extra seats were due to resignations in the previous Senate term. The candidates came from the slates Friends Urging Campus Kindness, LEAD, and Student Focus, along with a fair showing of Independents.

Two Ballot Measures were up for vote: A bill to make more official ASUCD's prohibition from endorsing political stances, and a bill to allow the ASUCD Court review some elections cases, among other things. Both bills passed easily.

The primary issues candidates took on this election were:

The issue of being responsible and serving with integrity was also prominant in the campaigns. For a good look at the issues candidates thought most important, see their candidate statements and their slate platforms. 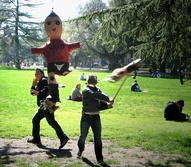 A generic LEAD pinata being hit on the Quad.

With more than half of the candidates not members of Student Focus or LEAD, the campaign tactics were considerably more inventive than the usual yellow/red t-shirts and glossy flyers. Senate candidate Rob Roy made a music video that he showed during Robotmedia as well as over the Internet. Behzad Farahbakhsh had t-shirts that played off the traditional slates, reading "Student B.E.H.Z.A.D.", as well as pins that said "I hate Bezhad." And, well, there was a third-party-slate whose name formed the acronym "F.U.C.K."

An effigy of Student Focus President Kalen Gallagher before being destroyed.

Making the first day of the election particularly memoriable, the Friends Urging Campus Kindness slate arranged to have the Quad/CoHo area reserved for over an hour during lunch time on Feburary 23rd. In the spirit of the movie Napoleon Dynamite, Friends candidate Pedro Hernandez made pinata effigies of the opposing slates (and, to be fair, one of Rob Roy's head). Many participated in the pinata fun, including LEAD, Focus, and Independent Senators.

After the pinatas, music was performed live in the Quad by the Playboy Millionaires. Candidates such as Rob Roy, Caliph Assagai, and Ari Kalfayan spoke briefly of their ASUCD goals over the amplified sound system. Many who had been at UC Davis for years said they had never seen such an impressive get-out-the-vote campaign.

The Playboy Millionaires and Rob Roy on the Quad.

The number of #1 choices received by each group.

The number of seats received by each group.

As you can see from the graphs to the left, the representation in the Senate very closely mirrored the top preferences of the voters. Furthermore, the Senate as a whole became much more diverse after this election. Another interesting statistical note is that candidate Rob Roy passed the threshold for election during the first round, and with 130 surplus votes. This was the first time since Choice Voting was implemented that a candidate passed the threshold (won) in the first round.

Various questions about what would happen in this election if different voting methods were used are answered on Winter 2005 ASUCD Election/Bizarro World. Particularly interesting to note is the fact the Student Focus slate benefited the most from the use of Choice Voting, while they had been historically the most opposed to the voting system.

Litter in front of Abby's apartment

Litter on Abby's stairwell During the election, as in all elections, things got heated. Some of the things that happened were: Rob Roy made a music video which refered to Student Focus as "the slate that you should hate"; Senator Ari Kalfayan claimed to be the "anti-Rob Roy" in his Facebook profile; Senators Brianna Haag and Cindy Yu tore down FUCK flyers; Rob Roy created an anti-Student Focus wiki page; Student Focus flyers were littered about SOS Secretary AbbyLawson's apartment entry.