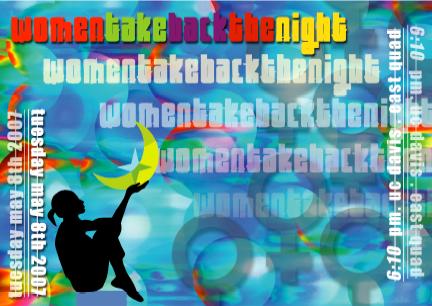 Women Take Back the Night is an international tradition with marches and rallies occurring around the world since 1976. That year, in Belgium, women attending the International Tribunal on Crimes Against Women marched together in solidarity, holding candles to protest the ways in which violence permeates the lives of women worldwide.

Women Take Back the Night rallies have been held annually in Sacramento since 1979, and in Davis since 1981. The event is organized totally by volunteers, with active participation from many community based organizations in the community.

The highlight of Take Back the Night is the march when women walk through the night and reclaim the streets, which for many years have been sources of fear and violence. Another important aspect of Take Back the Night is the survivor testimonials. This serves as a safe place for survivors of sexual violence to come forward with testimonials, often sharing their experiences for the first time. The Sacramento event also provides a special program for children and an opportunity for men to come together at one point in the evening to share ways for men to help end violence against women.

Join in protesting violence against men, women, and children at the 28th annual UC Davis Take Back the Night taking place May 4th at 6:10pm on the East Quad. This event includes the spoken word group Sick Spits, survivor speak-outs, keynote speaker Lula Ahmed-Falol and a march through Davis that ends in the Segundo dorms. After the march, there will be free food and performance by acoustic guitarist Dave Ronconi and the fire dancer/spinner group Fire University.