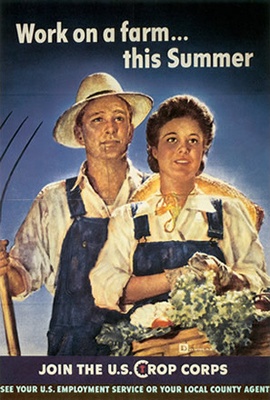 The war effort demanded much of citizens as well as soldiers from Davis.

The day after the attack on Pearl Harbor, December 8, 1941, the United States declared war on Japan, and three days later followed with Germany and Italy, ending the long standing Neutrality Acts. The war would come to be known as World War II and affect nearly every person in the United States, including the people in Davis.

One of the greatest domestic tragedies and a mark of local shame is the Japanese internment that occurred, especially on the west coast. The Davis City Council officially supported the internment in 1943. In addition, all people of Japanese descent were banished from the city by Mayoral decree until the end of the war.

UC Davis suspended all undergraduate studies during the war, and much of the campus was then controlled by the U.S. Army's Western Signal Corps. During this time, the campus was known as Camp Kohler. The Arboretum became a zone for soldiers to simulate combat and detonate explosives.

Although classes resumed in 1945, it would have been a fairly barren campus that year. Many American soldiers began to return home in May after the defeat of the Germans, which would have allowed some to register for fall courses. However, the soldiers stationed in the Pacific islands did not begin to return home until mid-August. Adding in the average month of travel by ship, many soldiers would have found it difficult, if not impossible, to register for the fall semester which began in October. By 1946, the bulk of the American soldiers had returned home which caused a tremendous explosion in enrollment; in fact, there was a record enrollment of 1,200 students.

Student activities quickly regained lost ground, but budget issues and the position of the school as a branch of the UC Berkeley College of Agriculture saw terrible neglect to the classrooms, labs, offices and housing. Maintenance of facilities was minimal and needed major attention. Under editor Bill Allewelt, a special Aggie was printed that highlighted the conditions of the buildings, complete with photos. A group from West Hall went into the Capitol in Sacramento and placed copies on the desks of each legislator during the middle of the night. Soon after, the needed attention to campus facilities began.

Stemming from the budget issues, Picnic Day was cancelled in 1946. In its place, there was a stripped down version called Round-up Day. Compared to past picnic days, it was pretty lame.

The Davis Cemetery Veterans Marker, and the duplicate at the Veterans Memorial Building, lists men from Davis who died defending our country.

The local Davis residents who gave up their lives in World War II: