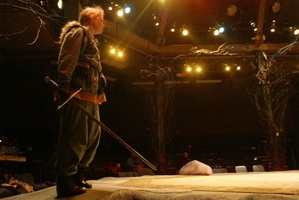 MFA candidate Paula Dawson rehearses for Macbeth in the Wyatt Pavilion, aka the Wyatt Theatre, in January 2006. 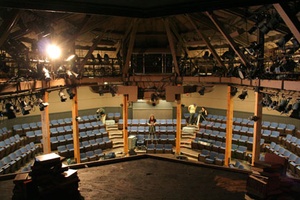 A view of the audience from the inner-above. 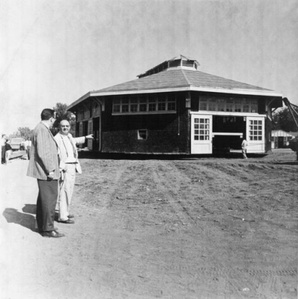 The Wyatt Pavilion is located on Old Davis Road across from the arboretum. UC Davis' Department of Theatre and Dance often stages performances in Wyatt, which seats 200. The venue's small size and Elizabethan style seating create an intimate environment between actors and audience. Nearly opposite from its current incarnation, the Wyatt Pavilion was originally a livestock judging arena, erected in 1907, but was relocated and renovated into a theater in 1963. In addition to featuring a thrust-stage1, the stage itself features two levels that are referred to as the "inner below" and an "inner above". The theatre stage itself accomodates floor traps (trap doors for exits and entrances of actors or set pieces), as is often the case in theatre venues. Backstage features two large set/prop/entrance spaces from behind the theatre "cheeks"2 and two dressing rooms equipped with bathrooms. Public restrooms are accessible from the outside of the theatre on its southeast face.

-JudithTruman was the Stage Manager for Shakespeare's "Much Ado About Nothing" in Spring 2000. Her roomie was costume director and arranged for cast members to wear genuine Mustang football uniforms and Band-Uh gear. It was awesome.

1. The venue has a "Thrust Stage", which means that from the stage, a narrower "tongue" projects into the audience, so that seating takes the shape of the letter "U". Think of a wide model's catwalk that allows much more mobility than a simple walk-and-turn.
2. "Cheeks" are the walls on either side of the stage that provide masking, essentially preventing the audience from seeing the backstage area.