The Yellow-Billed Magpie (Pica nuttalli) live only in the Central Valley of California. Because of its rarity some birders travel from around the country just to see our special magpie. The highly social birds prefer to build nests high up in trees, normally oaks. Magpies are not picky about their diets, eating earthworms, insects, eggs and young from other bird's nests, and roadkill. Around Davis and Central California magpies take full advantage of the fresh fruits, grains and berries grown by farmers. In the Fall, acorns are also an important food source.

In the Arboretum and around Davis you can easily spot magpie nests high up in the trees. They are huge and dome-shaped, constructed from loosely thatched sticks, mud, and grass. In late February the birds lay six to eight eggs in these nests.

There are a lot of these hanging around Olive Tree Lane/on Russel by Arlington. The walnut trees, random roadkill, and freshly tilled land makes for an excellent meal I bet.

Magpies are a close relative of crows and jays and share their gregarious behavior with them.

A recent Sacramento Bee article ("Magpies threatened by West Nile virus" SacBee, April 6, 2008) revealed that the magpies are particularly vulnerable to the West Nile Virus. One of the interviewees speculates that if the birds continue to die from the virus at current rates, they could be extinct in 3-4 years.

If you see a dead bird, please report it here: http://townsend.ucdavis.edu/report-a-dead-bird/ 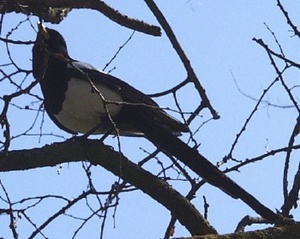 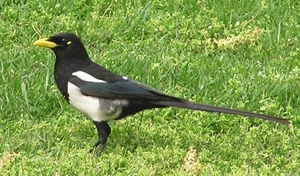 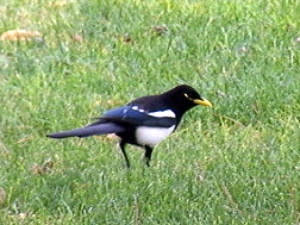 The magpie has iridescent blue-black wing-feathers. 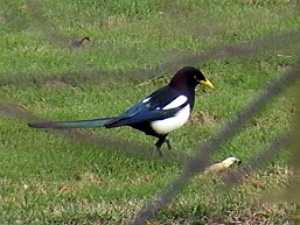 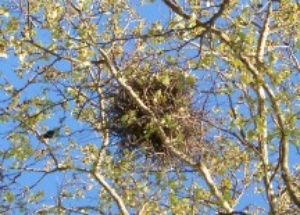 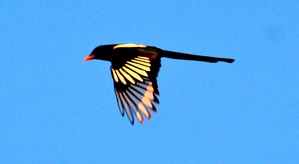