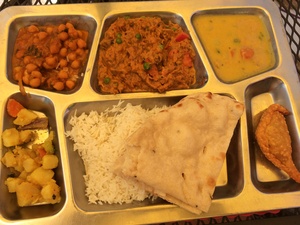 Lunch vegetarian Thali with Benghan Bharta.  It's a lot of (tasty) food for the money.

Craving the rich flavors of India and Nepal?

Yeti Restaurant specializes in Indian and Nepalese cuisine. It has a nice outdoor patio on the E Street Plaza. Rice is included with entrées, but naan is not. Many dishes can be prepared as vegan -- just ask!

Yeti moved into its current location after Thai Bistro closed down.

2012-05-19 09:41:55   I've been pleasantly surprised by this place. By far the best Chicken Tikka Misala I've had in Davis. I've tried Namaste Napal's and Raja's but they don't quite compare. Their samosas were also very good. I will be returning. —OliviaGlass

2012-05-19 14:42:51   I was disappointed by how few vegetarian options they offer. Only three entrees—saag paneer, navratan korma and aloo gobi—which is kind of shocking for an Indian place. On the other hand, my dining companion was really pleased with his tandoori chicken, so maybe meateaters should give this a shot. —Psittacosaurus

2012-05-30 17:53:38   Went here for dinner a few nights ago. Service was pretty slow but I guess thats too be expected since they're just starting out. We ordered the veggie combo appetizer platter which was very delicious, but a little too greasy. Their naan is pretty tasty also. For entrees we got the matter paneer and chicken tikka masala. Both were very delicious. Each of us also ordered Mango lassis which were huge and pretty tasty. A warning for those of you who can't handle spicy, I generally like my food pretty spicy and we usually order our Indian food medium spicy, as we did here. Here though medium was way spicy was way too much. Next time I'd definitely order mild. —ShankarSankaran

2012-06-09 20:41:13   I went to this restaurant tonight. I have to say I was pretty disappointed. The food was ok, not that great. The service wasn't bad despite what the last few commenters mentioned. They didn't have soda so I got a Mango Lassi, it was ok, but again not great. We ordered the Chicken Tikka Masala and the Rhango Josh. Though the menu doesn't say so the waiter told us that you get rice or naan with each dish. It was $11.99 for the chicken tikka and $12.99, since the menu isn't online yet I thought that might help people out. The portions were small though, neither me nor my dining companion were full and they were not spectacularly good either. We both agreed that on a scale of 1-10 it was a solid 5. —hbtisell

2012-06-18 09:21:38   Went there for lunch with a work colleague. We did have good service (although we had to ask for the check after a long wait) and the chef/owner did come out and ask us how the meal was, which was nice. The flavors were bright and interesting, however the lamb was so overcooked and chewy. I will give it another try as I like sitting on the patio. —LokiAbbi

2012-06-25 22:50:29   I came here tonight with my husband. We were going to Kathmandu cause we have a coupon but this place was 20% off orders of $20 or more so we tried it. It was great! We had the meat combo platter (9.95?) and the navratan korma (8.95?). We also got an extra side of garlic cilantro naan (2.25) even though the meat platter came with plain naan. The service was good! Although, we were the only ones in there to start... :-) All the items on the meat platter were great. The sauces were great. They were the typical tamarind, mint chutney, and spivy curry sauces that you find in other restaurants but with a different balance of seasonings. Very nice. The vegetable curry we had was really great! It look small in that little dish it comes in, but really, over rice or naan, it's quite a bit. I was telling my husband that kathmandu used to be my favorite but I feel a few months ago they changed their style to become a bit more mainstream or commercial. Yeti has a bit of the rustic authentic feel to it (coming from someone who has never been to India or Nepal) that I used to like about Kathmandu. I'm glad it's here and I want it here for good!!!! I would give it a 4.5 of 5. (My favorite Indian restaurant is in Kawasaki Japan and that one is a 5). —hitobito

2012-07-02 06:22:36   We went last night. Basically a decent place. Pros: outside patio, friendly staff, free pakoras because of long wait, there were in fact at least 10 vegetarian entrees, good food flavors, big mango lassis. Cons: wow its slow! There are some English barriers so you don't have a lot of confidence that the order is right. Wine is a bit pricey considering rest of menu. And come on about rice, chutney etc. Would it be so hard to serve rice with every meal instead of requiring it as a side dish and then giving small portions? And I have to disagree with spicy comment below— I ordered "spicy" and it was what I would call medium. Tandoori dishes looked beautiful but my husband said it was basically just shrimp and lettuce. —JaneBF

2012-07-12 14:02:09   I just had the lunch buffet yesterday. Hands down the best tasting Indian food I have had in Davis and the staff were pleasant and helpful. I was surprised how few people were there. Do yourself a favor and try it. —AlanAldrich

2012-07-21 20:58:46   My wife and I hit up the lunch buffet today. We were toward the end of the lunch time, a few minutes after 2pm, so some of the dishes were running a little low. Overall, though, the food was pretty good. Not amazing, but pretty good. The naan was quite light and fluffy, although maybe a touch too salty (and I like salty naan!) Service was good, and they kept my water filled—which was awfully nice on a hot day like today.

All in all, it's good, but IMO not the best Indian in town. I'd want to try ordering it for dinner, rather than relying on a lunch buffet, before making a final judgment, though. —TomGarberson

2012-07-23 12:31:42   The vegetable momos were superb the other night when we went for dinner. Also I enjoyed the spiciness of the chutneys that accompanied them. It looks like their buffet is veg-friendly, too (which isn't surprising, just notable). —ChrisV

2012-07-29 21:33:52   Ate here tonight. Food was good! I had the Rogan Josh, which was good, but unfortunately I have had better. Boyfriend had the Chicken Tikki Marsala, which I daresay may have been better than Kathmandu's. Service was prompt and polite. Also had the Mango Lassi - they give you a huge glass full. Delicious! Entrees come with your choice of rice or naan, but you can order extra on the side. —Adalwolf

2012-11-18 08:29:46   ate there last night and it was GREAT! We came in and apologized that we had to get a quick bite and what would be best to order. They have a "quick foods" part on the menu but he told us that he could get anything out quickly. He did and it was excellent. Chicken Saag, and an eggplant dish. I'll be going back. It was really good! —Lasan

2013-04-08 17:34:59   1st time. I had lunch today. I think it is possibly the best Indian restaurant in town. My experience however was not good because of the portion size. After reading the reviews here I wanted my 1st time to be the buffet. Just so I could try different ways they prepare their different dishes. They no longer have the lunch buffet. So, I ordered from the dinner menu, a combo Tikki Marsala dish. (They do however have a lunch special). What I had was a very small bowl with 4 or 5 pieces of meat. The few pieces were amazing! Just saying The $17.00 order which I am happy to pay with a reasonable portion, was absurd! —ashleyinthemist

2013-05-16 12:01:15   I tried Yeti Restaurant a few weeks back for lunch and the only things I could say about the place is OM NOM NOM! I had the Chicken Tikka Misala and it is by far the best I've had around. The service was very good and the gentleman helping us was very polite. The only downfall was it took a bit of time to get the bill, but I have nothing negative to say about this place and I would recommend everyone to try it atleast once. —BrianIgarashi

2013-08-16 11:38:46   Food very good! Atmosphere...not so exciting. On my last visit, they accidently served me someone else's food. Before they told me it was mistakenly delivered, I picked up the bread and set it to the side. They then apologized for delivering it to the wrong table, took it back to the kitchen (including the bread I had moved), rearranged, then took it to the right table. I witnessed all of this from my table next to the kitchen. I understand there are mistakes and there was absolutely no complaint for the wrong delivery, I was just disappointed to see it rearranged and delivered to the right table. I spoke with the wait staff regarding this and no one understood. —CameronMunnally

2013-08-23 16:41:28   Have been to Yeti's twice since it opened. Both times, the food has been delicious. The people were very nice, and the owner was very attentive to make sure things were to our liking. Among the dishes we have tried are the muttar paneer, lamb vindaloo, and a chef's special curry. All of them were delicious. They also had samosas with both the cilantro and tamarind chutney, which were very good. The cucumber salad with a sweet and sour sauce was ok (I would prefer it a bit more spicy, but some others might like it as is, with a slightly sweeter sauce). Will definitely return. —ManuelCalderonDeLaBarca

2014-03-10 09:35:16   I went about a month ago with a friend, and the food was delicious. Had the pepper pot soup and a lunch special that I don't see on the menu provided, and both were fantastic. I will definitely be back. —acparsons

2014-07-11 20:55:36   I normally don't leave a lot of online reviews but this one deserves it. Great place! Most importantly, the food was very good and tasty, best Indian/Nepalese food I've had in Davis. The outdoor tables were very nice and gave a nice view of central Davis in the evening. The staff was very nice and friendly, we were waited on by maybe 4 different people and all were great. Food was a very good value, we got two entrees, a mango lassi (only $1.50), and an appetizer—total cost w/tax was about $30. Not bad for dinner for two in Davis. Give it a try! —EricJensen

2014-07-13 20:06:46   I have had a few meals here that were really good, so I decided to have them cater a recent party of mine. Everything was delicious, and I was really happy with the experience overall. Praj was very helpful and easy to work with. The veggie momos and the samosas in particular were a big hit, but I liked everything we ordered: chicken tikka masala, tandoori chicken, saag paneer, navratan korma, aloo gobi, and, of course, naan. (Actually, I didn't even order my favorite dish, which is the began bharta, because not everyone loves eggplant the way I do). I look forward to future meals and caterings with them. —RobertaMIllstein

2015-01-13 18:32:04   Wow. Did we just go on an off night? Three of us ordered two mains and two appetizers to share two nights ago and all felt sick to our stomachs afterwards as if something had been old or contaminated. I cannot recommend this place. I am still sick thinking about what we ate and the tables and chairs do not seem clean. Yuck. —MaryCarroll