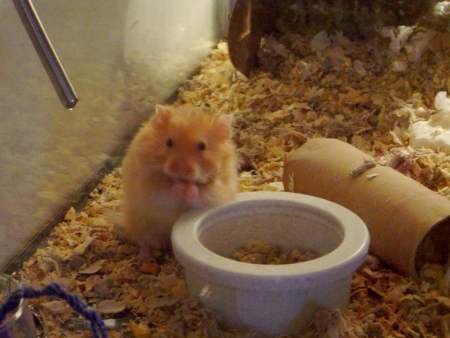 Yev was the mascot for SOSSS and Friends Urging Campus Kindness, and was running on the Elections Committee Slate for the Winter 2006 ASUCD Election. He lost by a close margin. For campaigning purposes, he was refered to as "Checkers" last year. This is in reference to the semi-famous "Checkers Speech" of Prez. Nixon. Nobody got it.

Poor Yev. Formerly known as "Happy Fuzz", the hamster Yev was adopted by MarieHuynh on November 7, 2004 from Petco. Yev was about 6 months old when the Petco people realized that he had a hole in his cheek where food was coming out when he tried to stuff his cheeks. They took him to a vet who shaved and stitched him up. Healthy but less fuzzy and with the ugly stitches on his cheek, they decided that nobody would want to buy him and stuck him in a 10 gallon tank beside a rat on a shelf under a bunch of stuff, labelled as "Happy Fuzz", up for adoption.

MarieHuynh was looking for a gecko, but decided to take "Happy fuzz" home instead. He was renamed Yevgeny The Tweak after Yevgeny Zamyatin, author of the book "We".

What an awesome name. (Says a Russian.) - MikeIvanov

He spent his last few months in the home of proud owner AlyssaOlenberg.