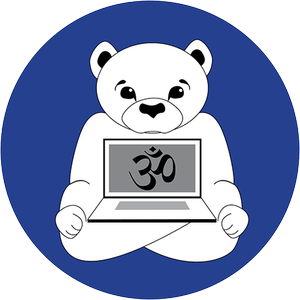 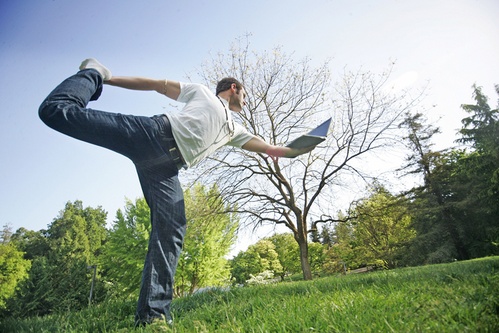 Computer & Laptop Repair Services include but are not limited to:

2011-03-04 11:57:01   Yoga Bear is a one ton beast of energy that was quick to summon via phone. Definitely teddy-bear-like-serene in the stressful situation of having a 6-yr-old desktop PC machine that would not boot. Let me know right away that it was indeed possible to transfer my Adobe software license on a dead machine, putting me out of panic/despair mode. Inquired if I needed an emergency/fast repair—I didn't—and I still got my diagnosis the day after handing off my computer.

Michael tested/explored every possible means of saving my computer, and he let me know that the needed repairs (to fix fried motherboard) weren't cost efficient. He also double-checked if I wanted to backup my hard drive's data or not—originally said no, changed to yes—and thinking back, Yoga Bear made the best (ie completely salvaged) my poor licenses+data situation.

Michael said he's had 15 years of experience in computer diagnosis/repair, so I trust his opinion. And the "mobile" element wasn't weird—actually super convenient. Being Yoga Bear's first customer I wasn't charged a diagnostic fee, just asked if I'd like to give a donation, but I'm sure labor rates are fair. Would recommend Yoga Bear to anyone. —NilaGurusinghe

2011-04-23 17:12:01   Michael doesn't stop trying until it is fixed. At one point, he put the video card from his home PC into mine for two weeks to see if the problem was with my card. I paid for the first visit, and he didn't charge any extra for any of the others (and there were many others). I didn't try the yoga, but I'm sure it's very good too. Michael is a cool guy, and he works very hard. I strongly recommend his services. —StevenLu

2011-06-02 11:37:52   Michael is great...very flexible and his attitude is great to be around. He recovered data from a hard drive with virus-erased data. I highly recommend his services. —Randall

2011-08-30 13:34:18   I used Michael from Yoga Bear when our computer crashed. He was up front with his cost which seemed like a very reasonable hourly rate so he took our hard drive home to work on it and called the next day with his findings.

Our hard drive was pretty much destroyed but he managed to save all our documents and pictures which were the only things I really cared about. We decided we were in the market for a new computer so he priced a few out so we didn't have to waste our time trying to shop around for something we don't know much about. Once our computer arrived, Michael came to our house and transferred all our old documents and pictures onto our new machine.

At the end of all this I was expecting a pretty big bill, but instead Michael charged us something so low I ended up adding money on just to make sure I felt he was getting adequately paid. All in all, this was a wonderful experience with a great person. I will definitely be using Yoga Bear for all my computer needs in the future. —RhondaElliott

2011-11-04 10:42:05   Our family had two desktops needing attention—a new high-powered machine with an irritating random freezing problem and an old HP holding a collection of pictures and school assignments that went dead. A call to YogaBearPC brought Michael to our doorstep within a few hours. He listened to my concerns and asked questions to determine what needed to be done and more importantly, my expectations. His prices were extremely reasonable and he kept us updated.

The dead computer was a lost cause because the motherboard was dead. Perhaps it was the new power supply I had put in it to support a better video card (he didn't blame me but I know it was a possibility. There is such a thing as knowing enough about computers to get you in trouble) Michael was able to salvage the information from the hard drive so no files were lost. The price was straightforward with no surprises. While he could replace the motherboard (definitely outside my comfort zone), it wouldn't be worth the price of parts and labor because the rest of the machine was several years old.

The high-end monster of a desktop (will NOT be a repeat customer of IBuyPower...) had been a headache since day one, seizing up anywhere between 30 seconds and 2 days. Michael ran diagnostics on everything component, including the ultra-videocard—and updated all drivers (something I should/could have done but with 3 kids and a million pets, never manage to keep up). He was honest in telling me that the only way to tell if it was fixed was to let it run. [Computers never have a glowing neon sign saying "this is what was wrong and now it's fixed" but they need to]

It made sense to bring it back and run it as it was meant to, in our home. Despite all the work he put into updates and diagnostics, Michael refused immediate payment for the high-end machine. He said to contact him in a month if it didn't freeze. Five days now—nonstop and going strong! —catsndogs

2012-01-03 18:36:53   We have a 5 year old Dell desktop with Vista that suddenly wouldn't boot. After trying a few system repairs myself to no avail, I searched out professional help. Yoga Bear PC popped out at me in Yelp and also on Davis Wiki. Michael responded quickly, came picked up the machine, asked relevant questions, provided me an estimated timeline, and delivered it back on time and fully working. At all stages he was timely and thorough in his communications, e.g. returning phone calls, etc. What more can you ask for?

Yoga Bear PC Repair seems to be one of the few streamlined low overhead companies that offers high quality yet small-scale PC service for a reasonable price.

2012-02-22 15:49:21   My roommate had a brand new laptop that suddenly wouldn't boot-up. She considered GeekSquad but their pricing and methods seemed daunting so she went with this guy instead. First of all, he was incredibly polite and cute (not single though, ladies), and my roommate's cat adored him; he adored it back. I thought it would be weird having some stranger, especially a guy, come into our house, but he was so nice that it wasn't weird at all. (Must be all that meditation.) I think the issue with the laptop ended up being either a bad Windows update or a bad download of some sort, but he had the computer back the next day even earlier than he said it would be. I didn't ask my roommate about the pricing but I assume it was quite reasonable since she didn't say anything. And her laptop has been fine ever since. If my computer or my boyfriend's computer ever go down, this is who I'm calling for sure! —gurglemeow