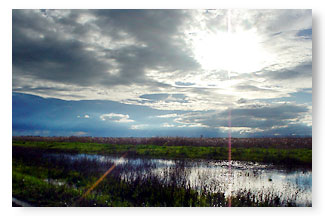 The Yolo Causeway is the stretch of the 80 linking Davis and West Sacramento; First built in May 1916 and spanning the Yolo Bypass, this stretch of the 1928 Lincoln Highway allows passage during rainy months when swollen creeks and rivers are diverted into the bypass. Should flooding ever result in a massive evacuation from either side of the causeway, be forewarned that Yolo County has a contractor ready to send forklifts to both sides of the causeway to keep traffic flowing. Their sole mission is to lift up any stalled car and drop it off Interstate 80 into the waters below. Before the causeway was constructed and the Yolo Bypass was simply a natural seasonal basin, it was nearly impossible to travel between Sacramento and the Bay Area... crossed by narrow roads that flooded seasonally, travelers generally made the trip on riverboats, until the raised Yolo Plankroad was built through the Yolo Basin. However, the wooden road was still subject to extreme flooding in some years and it ended up being more trouble than it was worth. The Plankroad was eventually replaced by the Tule Jake Road, hardly an improvement since it was often only usable in the summer months. Railroads were built through the Yolo Basin some years later. If you head to Sacramento from Woodland, you can still drive some of these old roads that parallel the raised railroad tracks during the dry months. 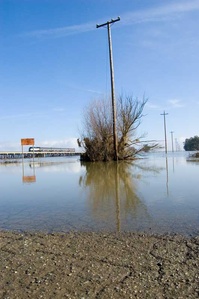 The land around the causeway was flooded in early 2006 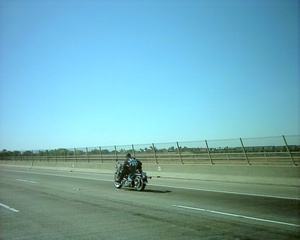 Though it is sometimes referred to sarcastically as "The Fabulous Yolo Causeway" or "The Scenic Yolo Causeway," the Yolo Causeway (including bridges 22-044 and 22-045) on Route 80 in Yolo County is officially designated the "Blecher-Freeman Memorial Causeway". Roy P. Blecher and W. Michael Freeman were veteran California Highway Patrol officers shot to death during an enforcement stop on Route 80 near the Yolo Causeway in the early morning hours of December 22, 1978 at the hands of an armed felon. The current Causeway was completed in 1962, and named by Assembly Concurrent Resolution No. 119, Chapter 147, in 1994. From: California Highways.

Joking aside, the view over the rice fields is actually quite nice sometimes, and many people prefer to bike across rather than drive through the rush-hour traffic... a slow drive down the access roads is also nice. The causeway is home to over 250,000 bats as well as a large amount of other fauna. On the south side are large rice fields, and the north side has a long view of the railway. To the west you can usually see the beginnings of the coastal range rising up on the horizon over Davis, while the downtown skyline of Sacramento lies to the east.

The ground below the causeway is what makes this area most unique. The causeway crosses an approximate 16,000-acre area known as the Yolo Bypass Wildlife Area which is a model of a public-private partnership that shows that wildlife, flood control and agriculture can co-exist in a largely urban setting. The Yolo Basin Foundation provides monthly tours of the Wildlife Area and frequent trips during the summer months to view the evening fly out of bats http://yolobasin.org/.

On the south side of the causeway on the way into Sacramento you can see the message rocks.

The causeway is blown up in Dale Brown's novel set in Sacramento, The Tin Man. 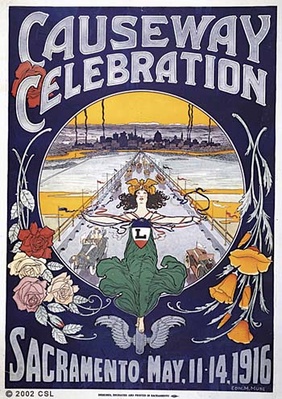 Poster celebrating the official opening of the Yolo Causeway 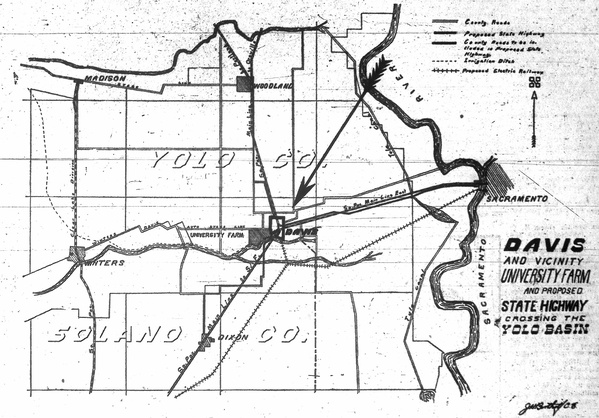 Map showing the situation in 1911