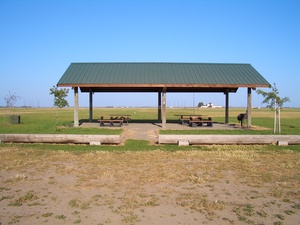 Yolo County Grasslands Regional Park is just one of many parks in the Davis area. This 320 acre park was acquired from the federal government with the agreement that it be used for public recreation. In 1990, the government expressed concern that the county had not yet made any improvements or otherwise utilized or public recreation. On December 2, 2003, the City of Davis pledged to provide funding support for improvements outlined in the proposed Interim Management Plan that include the dog park and family picnic access areas. Friends of Canines at Grasslands Regional Park have also pledged support for dog park improvement costs and maintenance, and Tree Davis has accepted responsibility for weed management within protected oak woodlands. The City of Davis has restricted public access to 63 acres as burrowing owl habitat [33 acres for Mace Ranch habitat mitigation banking plus an additional 30-acre easement] with additional acreage restricted by oak woodlands preservation and vernal pools. In exchange for this habitat mitigation, they pledged in 2003 to provide parity for the estimated loss of land value by providing $45,000-$50,000 for a 35 acre Bark Park at the southwest corner of park; included in this pledge was provision for perimeter chain link fencing, entrance gates, a ten-vehicle parking lot and water access.

Currently [2006], the only other public uses of the remaining area are archery and model airplane use. In winter, raptors are abundant while in spring, unique passerines may be found utilizing this oasis of trees among the fields.

2011-08-16 18:39:57   In August 2011, DDOG member Susan Bennett and her dog Ellie Mae were chosen as one team of 15 finalists in the Beneful Dream Dog Park Contest. The grand prize winner of this contest will win $500,000 toward developing their dream dog park. In this case, Sue and Ellie Mae want to put the money toward developing the 35 acre Bark Park at Grasslands Park on Mace Blvd., three miles south of Davis. Now that they have made it to Round 2 of the contest, the community is encouraged to register and vote daily until September 8, 2011. The public vote counts for 10 percent of the final score. The Beneful Dream Team will also judge the finalist entries, representing 90 percent of the final score to help select the grand prize winner. We need your votes! —AlphaDog