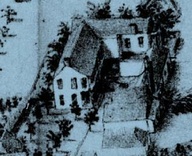 The Yolo House was the first hotel in the history of Davis and one of the very first buildings in town. The building was originally the home of the town's namesake, Jerome C. Davis, but in 1867 William Dresbach leased the building and began to use it as a hotel and bar. For a time, he also used the building as an illegal post office. The Yolo House was part of the original cluster of nine farmstead buildings that Dresbach began to call Davisville. The building operated as a hotel until about 1871.

The building no longer stands, and in its place is the UC Davis P-10 parking lot located at 1st and A streets.