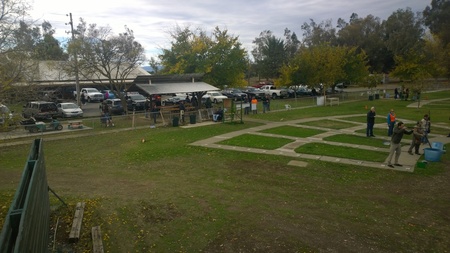 Annual Membership $40 Single, $50 Family + Daily use fees. With additional fees for non-members. As of 2011, the use fees have increased by $1. Daily use fees for the rifle and pistol ranges are now $9.00 without membership, and $3.00 with membership ($3.00 day use for trap and skeet ranges for non members). The fee includes two cardboard targets. YSA also offers ear plugs (ear protection required) in the clubhouse for $0.50. Safety goggles are also available for $5.

Membership isn't required to use their ranges. They have 10 yard handgun, 25 yard handgun/rifle, 50 yard rifle, and 100 yard rifle ranges, 2 trap/skeet ranges, and a sporting clays range. A string of trap (25 clays) for non-members is $7.00. Bring your own guns, and ammo. They have voice and remote activated pull mechanisms. On the weekends (Saturday/Sunday), you can usually get one of the kids to pull trap for you (you know... sit behind you and press the button when you say "Pull!") Sporting clay shooting is only available during Spring and Summer.

You can bring your own steel targets for the rifle range, but you can only use them on the 50- and 100-yard ranges.

Practical shooting matches are held here on the second Sunday of every month by the Solano Targetmasters.

You can hear rounds being fired from this club in West Davis when there is an inversion layer (layer of hot air above the surface air).

Range Rules (copied from a flyer you can pick up from them):

Our Range Safety Rules are for your personal safety and also the safety, peace and tranquility of those living in the vicinity. Please read and heed the following safety rules: Deviation from these rules shall result in immediate removal from the facility and possible dismissal from YSA Membership. YOU ARE REQUIRED TO KNOW ALL RULES & COMMANDS BEFORE SHOOTING. "Shooters" will cooperatively carry out the range firing instructions when Range Officer is not immediately present. ALL SHOOTERS MUST SIGN IN BEFORE SHOOTING: 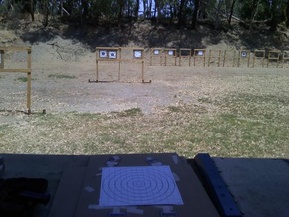 Seven yards on the left, fifteen down the center, and twenty-five on the right.

2010-02-07 12:07:36   You can use normal shotgun ammo at the shotgun lanes where you shoot clay pigeons in the air, you need the slugs only for the normal lanes shooting at a stationary target. —UCLance

2010-06-18 11:16:57   I went there thursday 6/17 and joined for the year... took my 8 year old to shoot her new 22... she had a ball. Paul was rangemaster, and he was very nice, friendly, patient with my daughter. it was great. my daughter wants to go back every week. this place is definitely not "corporate" but it is a great place and a super resource for the community. —Carsonsig

2010-11-08 17:28:50   I just purchased a Rossi 12 gauge single action shotgun seeing how Ive never bought a shotgun before I was wondering if I was limited to only shooting trap and skeet or could I break it in with some target shooting if I used some rifle slugs. —AlexBianco

2010-11-30 21:20:27   Range helper on skeet wasn't friendly. You can only use target loads for skeet, one shell loaded at a time. This was not posted anywhere, you are somehow expected to know this. I prefer Center of Mass for pistol shooting. And http://www.natchezss.com/ has great prices, too bad we in California won't be able to order ammo over internet as of February 2011 as a result of AB 962 and the requirement that you must submit a thumbprint for handgun ammo purchases. See http://www.ab962.org for more info. —AdamGetchell

2011-08-12 13:26:02   So I wanted to try this place out, but I am a bit confused. Do I need to have a gun and ammo to shoot here, or do they have guns I can rent and ammo I can buy?? I dont have a gun, but enjoy going to shooting ranges with my brothers and I thought it would be nice to spend an afternoon here. —AdreanaRubio

2013-09-02 12:40:32   YSA is a shooting range only. They do not rent guns, although they used sell shotgun shells in the past. I do some of my training courses there. I like to teach my classes early on weekends to avoid the crowd. —waltlucas