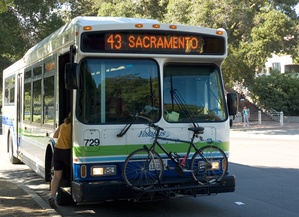 Yolobus is a bus system for travel throughout Yolo County, as well as parts of Sacramento and Solano counties. For travel within Davis, Unitrans' routes are more comprehensive and frequent.

Fares: UC Davis Undergraduates ride free with a valid student ID. Otherwise, $2.25 regular, $3.25 express, $7.00 day pass, Other fares are explained here: http://www.yolobus.com/riderinformation/yolobusfares.php, http://www.yolobus.com/maps/Farebox%20Media.pdf and http://www.yolobus.com/maps/FareDecrease2018-_ShelterZip.pdf Age 5-18 is $1.50 (between June 1 and August 31, it is 35 cents, or a "Summer Sizzler" pass for $15 (valid on Unitrans also)), and seniors (62+)/disabled are $1.50 Exact change, of course. Graduate students must pay the normal fare. Sacramento City College students can also get a pass for Yolobus, Unitrans, Sacramento Regional Transit, and other public transit systems for about $10, depending on how many units they are taking.

Some drivers have suggested swiping day passes through the magnetic strip reader because the ticket slot sometimes jams and won't return your pass.

Yolobus is operated by Veolia Transportation, a multinational corporation based in Paris and employing 72,000 workers.

There are two #42 circuits: 42A (the inner/clockwise circuit) and 42B (the outer/counterclockwise circuit). There are two 42A buses and two 42B buses (think of a Beryllium atom). They are timed to arrive 30 minutes apart. It takes exactly 60 minutes to travel between Davis [email protected] and Sacramento [email protected] in either direction, with a full circuit taking 2 hours exactly. Thus, it doesn't matter which bus you take if you are going between Davis and downtown Sacramento. Beware that the last bus leaves Sacramento at 10:35PM weekdays, and 8:35PM on weekends.

2008-07-26 11:16:45   It would be great if one of the Davis supermarkets sold the monthly passes and express passes. Otherwise, if you want to buy a pass during non-business hours, the only option is driving to the Bel Air or Raley's in Woodland. I just emailed Nugget market to ask them to carry it. —MichaelMacIntosh

-It should be free for any Yolobus regardless of location. People do take buses to Sacramento and then transfer to other Yolobuses going somewhere else. —MaxLucas