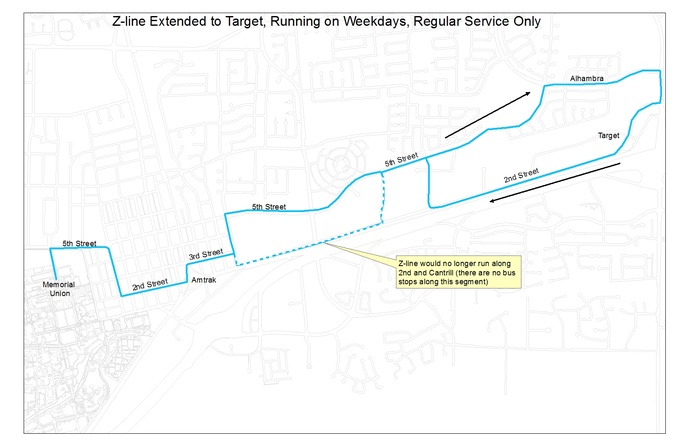 Extend the Z-line to Target vial 5th-Alhambra-2nd-Pena.  The longer route will require more time and could be provided by reducing the frequency of service to Greystone, Eleanor Roosevelt Circle, Amtrak, and downtown.  An extended Z line t would add service further east, providing weekday service closer to Target and the other stores at 2nd Street Crossing.  Like the current Z-line this route would only run on weekdays designated on the calendar as “regular service” (UCD classes in session).  If a new West Village line to the MU is provided, this bus would run hourly.  As an alternative, this new Z -line could continue to run twice an hour, but only if the new West Village – MU line were not implemented.

The Z Bus Line is a Unitrans route servicing Downtown/Amtrak, Cantrill Drive, 5th Street. It provides service twice an hour during the day from the Unitrans Memorial Union Bus Terminal. The Z line does not run during Finals Service, Weekend Serice, or Break and Summer Service.

Destinations on the Z Line