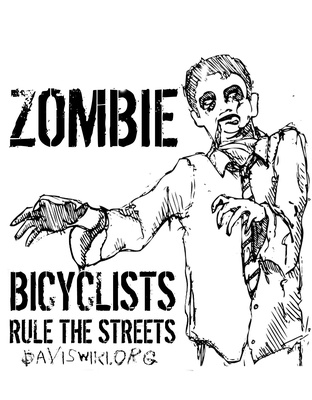 Zombies don’t like cars (you can tell because you have never seen a zombie driving a car). Anonymous inside sources at the Human Zombie Alliance told us in advance that scores of zombies planned on reclaiming the streets of Davis from the car-driven humans on Friday, September 28th, at 6pm. The zombies met at Central Park at 5:30 pm to get infected by the big oak tree.

Our sources also tell us that this was simply a defensive action against the car invasion and should not be viewed as aggressive in nature, rather meant to reclaim stolen zombie lands. Humans who unfortunately find themselves car-driven at the moment of this action should remain calm. The zombies will not bite when approached. Drive slowly as if your children were playing in the street. Honking soothes the zombies. Honk if you love the zombies. Encourage the zombies to ride. They will be less of a menace to civil society the faster they get to the Davis Cemetery.

This 2007 event has, as yet, no indication of a reinfection in 2008, but it does seem to be the closest thing to a proper Zombie Walk that Davis has ever had.

This page has nothing to do with the Pirates Reclaim the Streets page or Critical Mass.

2007-09-29 23:13:55   How do I get in touch with someone who helps organize the Pirate Bicylists reclaim the streets, Zombies, Critical Mass, etc? Would love to do a story on them! Please email me at [email protected] —Cary Arnold

2010-11-11 16:31:04   We need some updated information on zombies in Davis. Does anyone know where they are most likely to be encountered? I'm familiar with basic anti-Zombie weaponeering (i.e., 12-gauge is preferred) and basic Zombie physiology and physiognomy, but I'm just looking for Davis-specific information to keep myself clear of Zombie concentrations. —Flokkenfisch