Abrham Castillo-Ruiz is an independent candidate for ASUCD Senate in the Fall 2009 ASUCD election. 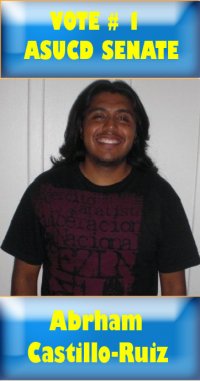 My name is Abrham Castillo-Ruiz, I am a fourth year student here at UC Davis. I am from Greenfield California, and I am double majoring in Chicana/o Studies and Native American Studies. Currently I work in the Chicana/o Studies Department as the Community Relations Co-Intern and I hold the External and Political Chairs for M.E.Ch.A. de UC Davis.

I am running for ASUCD because I would like to take this campus towards movements of social justice. I believe that the issues I am fighting for would improve student life all across campus, and they would be relatively easy to do.

The Ethnic and Lavender Graduations are not taken seriously on our campus, yet they are necessary spaces for specific communities to properly celebrate the achievement of higher education. It is important for Universities and students to recognize the need for these spaces and to support them in as many ways possible. Institutionalizing funding for these celebrations would show that there is student support for these communities and their continuing struggle for higher education. I will advocate for ASUCD to institutionalize funding for these incredibly important ceremonies.

Assembly Bill 540 allows students with no legal residence status to attend institutions of higher learning and pay in-state tuition fees if they meet certain requirements. However, the majority of these students do not meet these requirements and are therefore forced to pay higher fees. Aid for AB540 students is usually scattered throughout university campuses, if it is even present, making it even more difficult for students to find their way into universities. I will push to create a centralized AB540 support network throughout the Financial Aid and Student Affairs Departments to help retain these students, making entering UC Davis much easier for new students.

The 24 Hour Room is the only room on the UC Davis Campus that is open 24 Hours a day, 7 days a week. The 24 Hour Room usually fills up quickly, leaving students who come at later times to stand around waiting for a spot to open up or to simply go back home. Having more places open throughout campus for 24 hours would lessen the stressful impact put on the 24 Hour Room and give students a guaranteed place to study. Opening various lounges throughout campus (such as the Wellman Lounge) would be relatively cheap and easy to do, and would make a large impact on many students who would otherwise be spending time waiting for spots to open up. I will open up these spaces for students so they can have free movement about campus and not be limited to one space.

Recently, UC Davis has made it mandatory for any event taking place in either Freeborn Hall or the Memorial Union to go through Sodexo for food catering. This is problematic because it takes away the freedom from organizations and departments to choose their caterer should they host an event in Freeborn Hall or the MU. Sodexo has also had ties with labor issues (modern day slavery, unjust wages, etc.) in the State of Florida. I oppose this new regulation and will advocate for having it lifted off of both buildings. Seeing that ASUCD has already passed a bill that opposes the unjust practices of Sodexo, I believe this action would strengthen the stance that our Student Government has already taken against giving money to a corporation that refuses to answer these accusations.

If you have any questions, comments or concerns, please feel free to contact me through facebook, e-mail, phone call, or text, and I will get back to you as soon as possible :)

SO PLEASE VOTE ABRHAM CASTILLO-RUIZ #1 FOR ASUCD, and vote Joel Juarez and Marisol Ornelas #2 and #3!

2009-11-10 23:08:43   nice to see that you couldn't find anything wrong with his platform Carla. The best part is that your sentence is not even grammatically correct. Sarcasm doesn't work when you don't even have your shit together. Wow.