So the tires of your bicycle are flabby and squishy. Bicycling with flat-ish tires can ruin your rims! Drop by one of these locations so that your bicycle can inhale some much-needed air. If you've a flat, learn how to fix it, or enlist the help of a Bicycle Shop. This Google Map shows the location of most of these pumps.

When pumping up at gas stations, you typically face a 50-75 cent fee. California law states that air is free for cars purchasing gas, which is irrelevant in a bicycle's case, but you can often just go inside and ask them to turn on the air without being questioned. You might not want to go this route, however, because gas station air compressors will often blow bike tires up.

Many Bicycle Repair Stations have pumps, as well as tools for making repairs.

Note: pictures of the harder-to-find locations would be helpful ...

Most of the pumps listed below are for tires with Schrader valves (the type you'd see on car tires). If you have a higher end bike, you'll probably have Presta valves on your tires, which won't work with these pumps! There is hope, however. Most bike shops carry Schrader to Presta adaptors for about $1.

View of the Regan bike pump, with Regan Main in the background 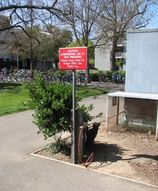 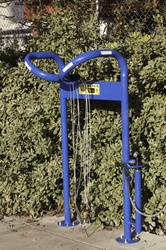 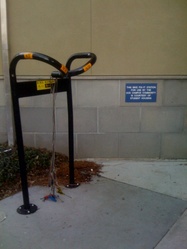 The Oakshade pump has a fancy plaque above it

this one hasnt worked for awhile. Maybe the air compressor isn't plugged in?

How to fill up your tire

The first thing you'll need to know is what type of valve you have on your bike. Most valves are either Schrader (common on mountain bikes and cruisers) or Presta (common on road bikes). Most pumps around town are for Schrader valves (which are also used for cars), so you may need to purchase a Presta-to-Schrader adapter (about $5 or less at any bike shop) to use these pumps around town.

Next you'll need to see how much pressure your tire can take. For some pumps you can just inflate your tire until it stops inflating, but beware — there are many pumps that will pop your tube if you over-inflate (especially at places like gas stations)! Your tire will likely have a maximum amount of pressure it can take written on the side of the tire. Look at that figure and inflate no more than that point. It's usually around 40 psi for mountain bikes, 80 psi for hybrids, and 120 psi for road bikes — but make sure you check yourself. If you have a mountain bike or hybrid, you'll probably want to run the pressure at or close to the max rating when on pavement. If you're going off road, run the pressure a bit lower for more shock absorption.

Bike tires can lose up to 10 psi per week, whether you're riding or not, so regularly checking your tires is a good idea.