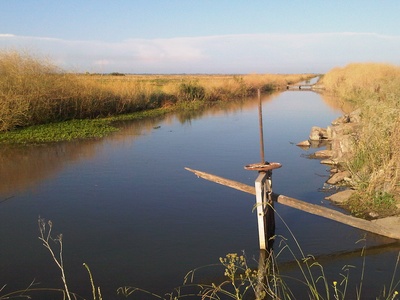 Conaway Ranch is a 17,244 acre property that sits to the east of both Davis and Woodland and west of Sacramento. Two-thirds of the property sits in the Yolo bypass (the 'causeway'), the sink of Cache Creek, or the Green Zone between County Road 27 and County Road 29. Most of the ranch is currently protected by Williamson Act contracts. All of the land is zoned for agriculture or agriculture preserve and is leased to more than 20 farmers and various waterfowl and hunting groups. Also, there are three different 500 acre wetlands on the ranch.

Prior to 2001 the property was owned by a subsidiary of PG&E, called PG&E Properties. When PG&E Properties went bankrupt, it was acquired by National Energy and Gas Transmission, NEGT. In 2004, the Yolo County Board of Supervisors announced plans to acquire Conaway Ranch from NEGT, which itself was now bankrupt. By order of the bankruptcy court, the property had to be sold in a closed-bid auction. However, by state law, Yolo County could not participate in that auction. The land was purchased in that auction for about $60 million by the Conaway Preservation Group.

The Conaway Preservation Group is composed of local landowners and waterfowl enthusiasts, such as Steve Gidaro and John Reynan, as well as organizations such as a farm holdings company. Steve Gidaro is the president of the group. Critics and some supervisors from Yolo County say that the group is intent on developing the land. Others, such as Family Water Alliance, have accused county politicians and their financial partner, the Rumsey Band of Wintun Indians, of wanting to develop portions of the land. The Rumsey Band has development projects in Yolo County, notably the 3,000+ housing project in the City of West Sacramento and its casino in the Capay Valley.

In July 2004, before the land was sold to CPG, the county voted to pursue eminent domain over the property. The ranch holds valuable water rights, among other natural resources. The county also claims that it has an interest in the land not being developed. Yolo County officials say that they are attempting to seize the land for the public purpose of maintaining the status quo. If they do purchase the ranch, it is possible that a future Board of Supervisors could rezone the land to permit industrial or other development. At the same time, there are no guarantees that the Conaway Group won't attempt to develop the land as it stands aside from zoning issues. If the county succeeds in acquiring the property, the county says that its plan is to transfer long-term management authority for the ranch to a joint powers authority or similar entity that may consist of the following: Yolo County, the cities of Davis, Woodland, West Sacramento and Winters, the Yolo County Flood Control and Water Conservation District, UC Davis, and possibly the Rumsey Band of Wintun Indians.

The Conaway Preservation Group maintains that the county does not need to condemn the ranch to fully protect the ranch's resources, which are already protected through local zoning, existing state law and local ordinances. Because all of the ranch is zoned for agriculture, no housing or other developments can be built on Conaway Ranch as things now stand. The Conaway Preservation Group claims it has no plans for development on the property, and has made no requests to the county for any of the land to be rezoned. Further, "The primary goal of the Conaway Preservation Group is to maintain private ownership while allowing for easements and other mechanisms to be placed on the ranch to protect the property's water resources, agricultural land, wildlife, and flood control benefits," according to president Steve Giardo.

Money for the county is a major question in this case. The county plans to borrow all of the money for the acquisition from the Rumsey tribe. It has not been determined what the price of the forced sale will be, or what rate of interest the Rumsey band of Wintun Indians will charge Yolo County. A jury trial will determine the sale's price. The county contends that it will be $60 million. Others, including Woodland Mayor Matt Rexroad, say that it will be $100 million or more. If the Rumsey tribe charges the county a fair market interest rate, the income from the ranch is much too low to pay off the loan. The county has not said where it will come up with the needed extra funds, which could be as much as $5.9 million per year.

Also at issue in the Conaway acquisition is that the county has spent almost $2 million on legal fees, and will likely spend much more before the acquisition occurs. No one from the county has said where the county will come up with the funds to pay the legal bills, other than cutting programs, services and acquisitions, such as library books.

On September 7, 2006, a settlement was reached between CPG and the county. CPG will retain ownership of the ranch but must abide by provisions set by Yolo County. Foremost, usage and sale of water will be heavily regulated. Sales and grants of easements will be allowed but the county will have first bid on any sale of any land besides small parcels. The $2.4 million in legal fees spent by the county will be paid in full by CPG.1