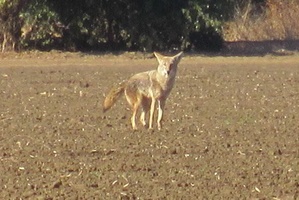 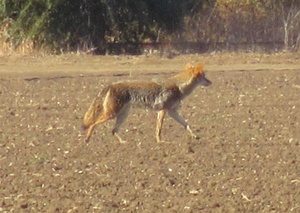 After this shot, it took off to the North at pretty good clip.

You can hear Coyotes in the farmland all around Davis at night. In North Davis they come down from north of County Road 29 and they hang out in the field north of Hunt's. To the west they can be heard west of Highway 113 south of Russell Boulevard in West Davis. Their favorite haunt to the south is the South Fork of Putah Creek which stretches from the distant west to the east.

Coyotes range through all of North and Central America, with a wide variety of subspecies. If you think you might have heard one, you can compare to these recordings.

Coyotes look more like this, when up close: taken in the Sierra Nevada Mountains near hiking areas that aren't near Davis: 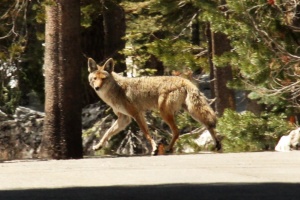 In June 2012, five coyotes (one adult and four juveniles) were killed in North Davis by the USDA Wildlife Service's trapper in response to a complaint by the Wildhorse Golf Club, who has said that they were responding to complaints by nearby residents. John McNerney, the City's Wildlife Resource Specialist, was not consulted about the killing; he has said that he "would have requested and facilitated a discussion with all parties to find a solution that allowed the coyotes to remain" and that killing the animals was a "last resort." A time-certain item (9:30 PM) was scheduled for the July 17, 2012 City Council meeting to allow for public comment on the issue. More than twenty Davisites spoke. A motion was passed, 5-0, discontinuing the use of USDA animal services at this time and directing staff to come back to with alternatives for wildlife management services in the city. USDA Wildlife Services has a history of questionable practices, which you can read about in the SacBee's three part series.

The killing of these Coyotes is a real problem, StevenDaubert is glad this is getting addressed while homeless human beings exist in Davis. 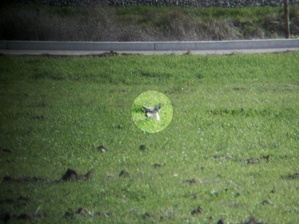 A coyote on 2nd street. Shortly after he ate my cat I think. I still wouldn't kill the coyote over it though. 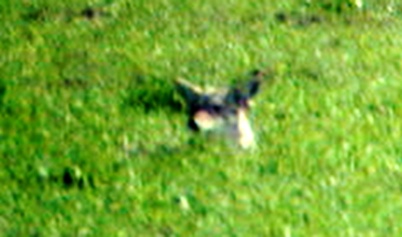 An enhanced detail of photo to the left. 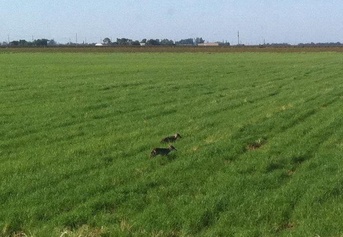 December 2012 Message from the City of Davis

On December 11, the city received a report of a coyote capturing and killing a domestic cat in the vicinity of Alhambra Apartments in east Davis. Although coyotes have been observed in the agricultural fields to the north of Alhambra Apartments for the last several months, they had been keeping their distance from the residential area and exhibiting acceptable behavior. This recent incident marks a new and unfortunate change in foraging behavior for these coyotes. Coyote management volunteers are currently attempting to locate the coyotes and implement hazing to move them out of the area.

The city would like to remind all residents of the urban/ agricultural transition areas that coyotes are a present and important wildlife species. Coyotes help to keep the populations of potential pest species like rats and mice down to a minimum. However, they are opportunistic, and will eat other available food items including trash, pet food and small pets. Access to these food items brings the coyotes closer to our neighborhoods. This closer contact reduces the coyote’s natural fear of humans and increases the risk of conflict.

It is important to understand that lethal removal of coyotes is not a sustainable solution to reducing conflict with them, nor is it an appropriate response to the recent incident. We as a community must embrace the fact that coyotes are abundant in the region and will never go away. We must also work together to prevent undesirable coyote behavior by eliminating access to food resources and implementing hazing methods to reinforce their natural wariness of people.

Tips for living with coyotes:

Occasionally, I've spotted coyote trotting through the fields on the east side of County Road 102 at dusk, between Woodland and Davis. I've also seen a dead coyote that had been struck by a car alongside Highway 113...both roads get pretty quiet at night, so be careful to avoid an unsuspecting coyote (or other animals) who may have wandered into lanes. —DukeMcAdow

2008-06-03 23:23:38   The last few nights I've heard coyotes making yipping and short hooting noises in the fields west of Road 102 and north of Hunt's. They sound like the tracks "Coyote Yips" and "Coyote Bark" in the audio link above. —DukeMcAdow

2012-12-09 18:47:24   On Sunday afternoon, Dec8 2012, I was walking with some friends and our two dogs on the levee road near the intersection of Hopkins road. A large coyote followed us at a distance of 20-40 meters for about a 1/4 mile. It was not scared off by our yelling at it, rather it continued to follow. Has anyone else noticed this odd behavior in the coyotes along the levee road? -DenaGrossenbacher —denagros

2013-10-14 01:41:11   There were at least three or four howling at the moon for about 30 minutes near pedrick tonight in west davis. It was pretty awesome. I've lived there for 2 years and this was my first time hearing them. Our neighbor has lived there for decades and said that he used to hear them regularly but hadn't heard them in the last 4 years. —MikeyCrews