Dylan Schaefer is a candidate for ASUCD Senate in the Winter 2012 ASUCD Election running as an independent. 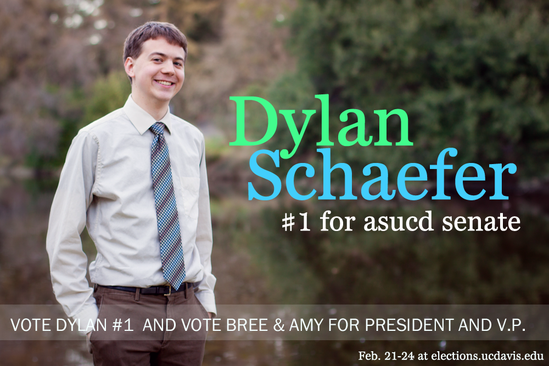 Hello everyone! My name is Dylan Schaefer, and I am a third year Economics and Political Science double major from Petaluma, California. I have been involved in ASUCD since my freshman year, and was previously the Director of City/County Affairs- ASUCD’s local government lobby. Additionally, I am a member of the Davis College Democrats and a founding father of Phi Delta Theta.

I am running for Senate as an independent candidate because I would like to tackle the big issues that students care about, but tend to be ignored by ASUCD. As a Senator, I want to make sure that ASUCD’s actions reflect the desires of the entire student body, and that ASUCD’s legislative branch works hard for the students.

As a Senator I will prioritize building relationships between ASUCD and the Police Departments as well as between the student body and the police. I would like to put together community events where off duty police officers will be able to mingle with students to hear their concerns and get to know them personally. Regular and serious communication goes a long way toward solving problems between any two groups, and this is no exception. We want students to be able to look up to police officers, not to demonize them.

In order to keep Picnic Day around for years to come, so that we can enjoy it as alumni, we need to work to reform the event and de-emphasize binge drinking (while not restricting anybody’s right to legally consume alcohol). Specifically, I would like to get the entire community of Davis involved in the event, with city organizations such as the Chamber of Commerce putting together events downtown in conjunction with Picnic Day to attract members of the community not affiliated with the university.

BETTER WI-FI IN THE COHO:

The CoHo is the central gathering place for undergraduates on this campus, and it’s a shame that during peak hours (which is almost always) there is hardly enough bandwidth to use Smartsite. One of my first projects will be to increase the bandwidth and number of WiFi channels provided in the CoHo so that wireless internet can be enjoyed by all patrons.

In the end, I’m running for this position because I care deeply about the campus and the student body, and want to continue to have the opportunity to be able to positively contribute to the lives of my fellow students. I believe that I have the experience and ability to accomplish all of my platforms listed above and more, and I hope that you will vote for me so that these goals can be accomplished.

Vote for Bree Rombi and Amy Martin for ASUCD President and Vice President!