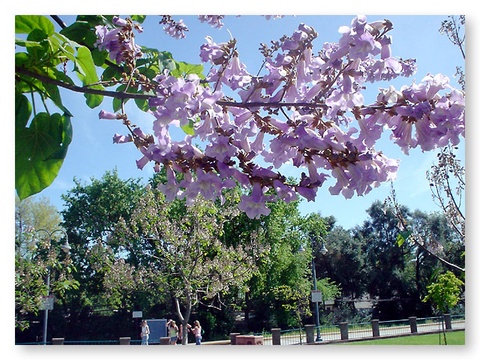 Empress Tree (Paulownia tomentosa), also known as Princess Tree or Royal Paulownia, is a beautiful flowering tree in the Scrophulariaceae family. This striking plant produces large upright panicles of lavender flowers in spring before leafing out with large velvety soft-green heart-shaped leaves. Each individual tubular flower is about two inches long and fragrant, followed later in the season by pointed green fruit capsules about 1½-inches long and filled with thousands of small seeds. Once each seed pod matures and dries to brown in autumn, its four compartments open, releasing the winged seeds within to self-sow quite readily in the presence of sunlight; combined with the species' rapid growth (up to 15 feet in a season) and adaptability to a range of climates, this makes the beautiful Empress extremely invasive. A single tree is capable of producing about twenty million seeds that are easily transported long distances by wind and water, germinating shortly after reaching suitable soil — seedlings grow quickly and flower within ten years. Like most pioneer species however, the Empress requires bare soil, sufficient moisture, and direct sunlight for seedling establishment. Once empty, the seed pods remain on the tree through winter, aiding in plant identification. 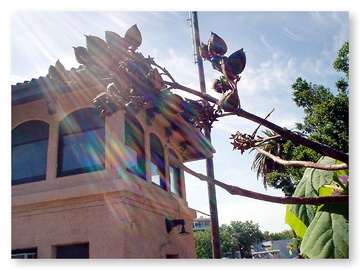 Pod detail Empress tree was introduced into the US as an ornamental tree around 1840 after reaching Europe in the 1830s with the Dutch East India Company. In its native western and central China, historical records describe medicinal, ornamental, and timber uses as early as the third century BC. The Empress is said to be planted in China upon the birth of a girl child, and cut down when she marries so the wood can be used to create a dowry item.

The Empress is an aggressive tree that can attain heights of up to fifty feet with a two foot diameter, growing rapidly in disturbed natural areas, including forests, streambanks, and steep rocky slopes throughout the United States. It tolerates hostile soil conditions, drought, disturbed habitats and rocky outcrops. Its ability to sprout prolifically from buds on stems and roots allows it to survive fire, cutting, & bulldozing. The Empress' root branches are shallow, horizontal, and lack a strong taproot; because of this, mature trees tend to be structurally unsound and rarely live more than seventy years. The living tree also proves to be quite brittle, breaking in heavy winds and even under their own weight. Despite this, Paulownia wood is highly valued and enjoys a strong market in Japan, where it was cultivated centuries ago.

For a listing of other plants found in Davis, visit our Town Flora.