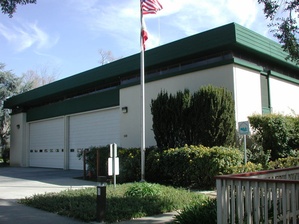 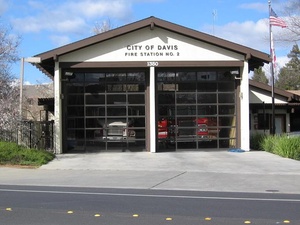 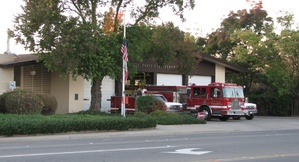 The Fire Department for the City of Davis has some of the Davis fire stations which handle the bad kind of fire (including grass fires) and exploding things around Davis and are first responders for 911 calls.

UC Davis has its own fire department.

Visit the website (above) for two great interactive features: a Protective Clothing Tour and a Fire Engine Tour. In the spring of 2007 they began training a Community Emergency Response Team, as well as a non-emergency Fire Corps.

2010-12-24 15:12:19   The picture above is of my son Noah with Firewoman Leah and Fireman Brian on Christmas Eve 2010. Thank you so much for the tour of your fire truck fleet, tools and gear. We hope you all enjoy the cookies we baked for you! Merry Christmas to all! —MandyLWittenberg

2012-11-08 09:46:43   I'm going to be a party pooper for a second. It is great that the firefighters are involved in charity work. But, a dozen guys collecting money in boots pacing around the intersection of 5th and B? Very distracting to the drivers, and not very safe at all. I'm pretty sure I almost got rear-ended- the person behind me screeched and stopped VERY close to me, probably not paying attention because he was trying to figure out what was going on or was reading "fill a boot to feed a family." And after the light turned green it took the people at the head of the line a while to get started because they were talking to a fireman out their window. Traffic there is bad enough without this additional hazard. If there were a dozen homeless men trying to earn money washing windshields at those red lights, that wouldn't fly. Why should this? —MeggoWaffle