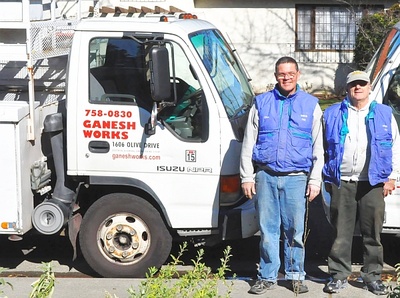 Ganesh Works is a general and electrical contractor. They tackle all residential and some commercial electrical work as well as specializing in energy efficient improvements, including whole house and ceiling fans, demand water heaters, PV (photovoltaic) solar installations and electrical car recharging stations.

In the past couple of years they have installed half a dozen photovoltaic solar systems and would love to do more. They are registered with the CEC and the California Solar Initiative and can provide documentation for and apply for the rebates. They believe that solar energy and energy conservation in general is a good investment in many ways and they'd like to help you reduce your energy diet.

Yes, Ganesh is a Hindu god, a man with an elephant head, which is a story in itself. Bob Morgan and Bill Cavins, fresh Peace Corps returnees from Nepal, started Ganesh Fixit in the Fall of 1972 at road 27 and 113 (before it was a freeway). They moved to Davis in '73 and were in two locations on Olive Drive before settling in at 1606 in the old Pac Tel switching facility. They progressed from fixing whatever came in the door to entering doors all over the Davis area to do handyman work. Bob long ago decided to get a real job at UCD in the Design Department.

The Ganesh Fixit Shop still exists as a place to bring stuff to be fixed. Vacuums, lamps, and power tools can usually be repaired. But please no more toasters, blenders or hairdryers which are not made to be repaired. They do reglue and repair chairs and other small furniture. They do minor welding, soldering, and gluing. If anyone can figure out how to get one of those Dyson vacuums apart, they might be able to work on them. They repaired a duck plucking machine once. If parts don't have to be ordered, most things are fixed in a week and usually get done on Saturday morning when the boss is there.

2013-03-29 13:46:47   It is disappointing when your expectations in a contractor are not fulfilled. On two occasions now Ganesh has let me down. The first occasion I asked them to install a dishwasher only to have my cabinets flooded. Mistakes happen, right? This time I made an appointment to have them install a water heater. When I called two days before install they assured me that they had installed this model before. When they arrived I got the word that they couldn't do it. On top of that the agent told me to go *$#?? myself. —TomRichey

2017-04-03 12:45:00   Ganesh did some work for us (connecting gas lines) last week and we couldn't be happier.  Very professional, efficient, and reasonably priced (estimate was far lower than a competitor's).  I recommend them highly.  -Roberta Millstein