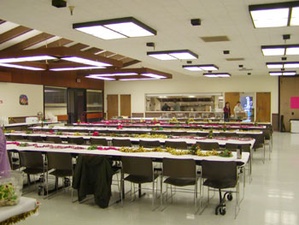 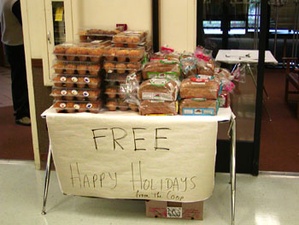 The annual Holiday Meal is a free dinner offered to the entire community. All the cooking, serving, greeting is done by volunteers - and there are plenty of them. Sign-ups to volunteer have been opened on the Monday morning after Thanksgiving, by locating a binder near the check-stands in the Davis Food Co-op. It is cooked in the large kitchen on the premises. There is also live entertainment on the band platform. It is sponsored by the Davis Food Co-op, the City of Davis, Sodexho, along with other donors.

The long line from outside the building bifurcates into two serving lines. First you pick up a paper plate, plastic "silverware", a napkin, and then walk down the serving line where you are offered various items (identified by cards). In 2005 there was: vegan mashed potatoes (with skins), vegan rice pilaf, vegan peas & carrots, vegan salad, and a choice of sliced ham, sliced turkey, or chicken. The cards made a big point that each was vegan. Another table has soft drinks, and two more tables have homemade desserts. You are allowed your choice of four items from the dessert tables. The desserts REALLY are homemade -where else can you get candy canes baked into cookies, chocolate-covered pretzels, and chocolate hemp brownies?

The meal is medium-sized, but there is no going back for seconds, owing to the long line of people not yet served. The food isn't much different from that served at the Tuesday night meals, except that probably higher quality ingredients are used here. On the way out each is given a small gift satchel. One contained two walnuts, two foil-wrapped chocolate balls, and a small candy cane.

In 2005, there was no "FREE" table as shown in the photograph above.

In 2007, volunteers began working on new decorations to be used each year at the meal including this backdrop for the stage: