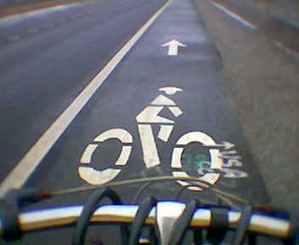 The Hutchison Drive Bike Lanes are a set of bike paths on the north and south directions of Hutchison Drive. These are the kind of touches that makes Davis such a bike friendly town. You can take it from town to the Airport or the Primate Center.

The lanes were announced in 2005, and work began June 2006, at a cost of 1.2 million dollars. They not only widened the road, they also repaved it. Why put new lanes on a road that has more hills and valleys than the golf course? They put on seven inches of asphalt overlay to keep the road stable since they didn't have the money to rebuild it from bed up, then had to build up all the driveways and streets that were then seven inches too low to meet the road.

TravisGrathwell noted before construction began, "Personally, I don't see what's wrong with the bike lanes as-is. Adds to the sense of adventure as you barrel down the road on the way to the Airport or the Primate Center".

SallyHensel commented on the finished project, "I biked to the Primate Center on February 22nd, and it looks like they did complete the project. I took that picture on the north side, but the south side is just as lovely". The above photo is from that day. 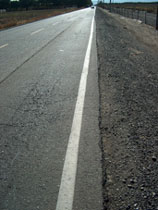 2008-08-05 15:23:14   It's actually a fairly wide road, and I would be surprised if it has more accidents than other country roads with bike lanes, like Pole Line or Old Davis Road. There's also a lot of roads with no real median like Pedrick or Mace, which are probably a lot more dangerous for bikers... —JoePomidor

2009-02-25 09:47:09   I biked all along Hutchison this morning and it is indeed very wide and with low traffic around 8-9am... but the path had tons of rocks from the gravel on the sides of the road. There is a bike path sweeper that comes to clean the path but it starts on the north side after 9am, probably after most morning commuters have already used it. —KellyM