Justin Gold is the 2010-2011 Student Assistant to the Chancellor. He also served as an ASUCD Senator, successfully running in the Winter 2009 ASUCD Election on the ACT slate. 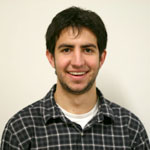 My name is Justin Gold and I am running for ASUCD senate.

I am a second year student double majoring in Political Science and Philosophy. I have spent the last 3 elections watching potential candidates promise inane platform issues that they either have no control over, or that don't actually work for. Honestly, I am tired of this.

I want to be an ASUCD senator because I believe that after talking to hundreds of students, I have a pretty good idea of what the students want. Furthermore, I promise to work tirelessly to achieve my platform issues and any other ideas that students at UC Davis feel are critical. If at first I don't succeed, I will look for alternatives; I will not stop working until all my options have been exhausted.

I believe that ASUCD senators have forgotten the student’s voice, and my goal is to work hard to make sure that voice is heard loud and clear.

So come out, and ACT at ASUCD Elections on Thursday February 18th - Sunday February 20th.

INCREASE EFFICIENCY AND AVAILABILITY OF UNITRANS AND TIPSY TAXI One of ASUCD's biggest resource is our Unitrans buses. Despite the amount of money spent on buses, they are often overcrowded and come infrequently(and even more infrequently on nights and weekends, when students could use them the most.) I will work with Unitrans to see if these issues can be remedied.

Additionally, I will work to increase accessibility of Tipsy Taxi. My hope is that by extending the hours of operation, and increasing publicity, students will be able to better utilize this value resource.

MAKE STUDENTS AWARE OF THE RESOURCES ON CAMPUS UC Davis has tons of resources available to students. Some valuable under utilized resources include peer tutoring, drop in essay tutoring, Counseling and Psychological Services (CAPS) and the Internship and Careers Center (ICC). I want to increase awareness about these services so students can take full advantage of their UC Davis education and experience. Students can be informed about these through seminars and informational sessions. It would be my goal to educate freshman about all the resources available so they can begin taking full advantage of all UC Davis has to offer.

CUT DOWN ON STUDENT EXPENSES BY BEING ENVIRONMENTALLY FRIENDLY There are two simple ways to do this: First off, I hope to work with Transportation and Parking Services (TAPS) to provide incentives for students who carpool or drive energy efficient cars . Secondly, I want to provide a way for students to get cheaper textbooks and encourage professors not to fall into the trap of updating to a new edition of a textbook every year. There are several ways to do that, one is by expanding the book exchange, which is yet another great but underused resource on the UC Davis campus. Other possibilities that are worth investigating are working with Amazon and ULOOP to provide books at rock bottom prices for as many students as possible.

CREATE MORE TRANSPARENCY IN ASUCD ASUCD is meant to serve the students. I want ASUCD Senate office hours to be publicized as well as frequent town hall style meetings where students can come and voice their concerns. Any senate candidate who says they have all the answers is wrong. No candidate, including myself, knows what the students want, unless they voice their opinions. I want to provide an open forum for students to be heard.

These are just a few of my ideas that I hope to implement in bringing change to ASUCD. I strongly believe that all new programs instituted by ASUCD should adhere to strict environmental standards. I don't consider this a platform, instead I see it as an inherent value that ASUCD has not lived up to in the past. On this note I also strongly support The Green Initiative Fund, and hope to promote other student initiated programs.

Please don't hesitate to contact me and let me know what you want done, because without you ASUCD wouldn't even exist. So if you see me around campus feel free to stop me and say hey, or talk to me about some of your ideas.

So remember, February 18-20 take the first step and ACT.

Vote Justin Gold #1 for ASUCD senate and the rest of the ACT. endorsed candidates, because its time we brought ASUCD back to the students.

My name is Justin Gold and I want to be one of your next ASUCD senators. I originally wanted to run for senator for the experience and because I wanted to be involved in student government. However, as I began to involve myself with ASUCD politics and this election, I have grown increasingly frustrated with how ASUCD is run and the disconnect between our student government and UC Davis students.

I have discovered too often senators run and don’t actually follow through on their promises. To paraphrase a current senator, “Once you get in here, it changes you and the direction you go. You sometimes forget why you ran.” What other justification could there be for senators showing up to meetings drunk, or missing them all together? What other justification could there be for senators trying to pass legislation that ASUCD has no power to enact. I am disheartened that ASUCD is not doing what is best for the students, and some senators are only working to stroke their own egos. I want to be an ASUCD senator to reestablish the notion that ASUCD senate works for students. Some of the major issues I immediately want to start with are:

Finally, I will continue to talk to the students to see what they want and be responsive to their needs, because somewhere along the way ASUCD senators forgot that they represent and work for the students. I promise to work as hard as I can to get things done. I am asking you to give me a chance to make UC Davis a better place.

So vote for Justin Gold #1 and Will Klein and Zaana Hall, because its time ASUCD senators stop working for themselves and start working for you.

2009-01-31 18:15:39   How exactly do you plan on going about any of your platforms? The lighting issue has been attempted by MANY Senators who simply make no progress because they are stonedwalled by both city ordinances, as well as the administration.

Why does Tipsy Taxi need better publicity; I'm pretty sure that everyone I've ever met who goes to Davis knows that the service exists.

What kind of incentives are you referring to when it comes to TAPS policy? If you're referring to the policy of offering massive discounts to those who drive hybrids and other alternative-energy cars while increasing the cost of the permits for those of us who can't afford these luxury items, then you're essentially proposing forcing your environmental beliefs on the student body on OUR backs. —EliYani

2009-01-31 18:42:54   Talk to Damon Williams ([email protected]) to learn more about how the campus lighting program works and what the practical limitations are for the program. —JasonAller