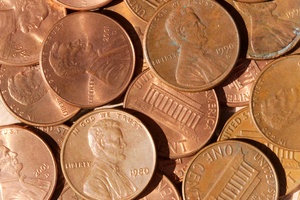 You have Pink Floyd stuck in your head now, don't you?

Money, also known as currency, has been used for a long time in order to exchange merchandise after people realized that Cows didn't fit as easily into your back pocket. Ironically, we now make wallets to hold our money out of cow skin.

Money is highly useful when purchasing items from Stores or buying food from Restaurants for example. Many people use virtual money instead as they find it even more convenient than the bovine-replacements of paper and coin. Although some people still store their excess cash under mattress while they're sleeping, most find it more convenient to store their money in Banks.

Sometimes money is in the wrong form, and thus you can convert your loose change to paper bills at locations like Banks and Coinstar machines.

Davis even has its own money, in the form of Davis Dollars, accepted in many places around town. There have also been earlier forms of money accepted locally. Davis Community Currency was an earlier attempt at a local currency, while the Davis Time Bank equates money to time.