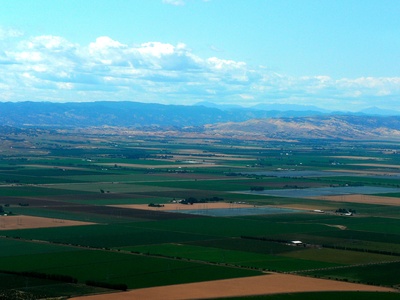 The Northern Coast Range looms west of Davis as a deceptively low mountain wall which stretches to the north past the point of visibility. To the south it runs to San Francisco Bay. It forms the western border of the Sacramento Valley. It is almost always visible and is generally easier to see than the Sierra Nevada Mountains on the east side of the Valley.

Due west of Davis you may have noticed a distinct gap in the ridge known as Berryessa Gap. That's where Monticello Dam keeps Lake Berryessa from turning most of Davis into a giant wading pool. It's also where you'll find Stebbins Cold Canyon Reserve, Mix Canyon, Long Canyon, Pleasants Ridge, and Blue Ridge/Rocky Ridge which starts at the right of the gap. The area is fairly low and dry, with many oak and bay trees. It is popular for bicycling, camping, fishing, and so on.

Highway 128 offers a scenic drive into the Napa/Sonoma Valley area going from Winters along Putah Creek. When you first meet up with Lake Berryessa there's a nice overlook where you can see the Morning Glory Spillway. You can also make it into a gorgeous bike ride—just be careful, since there are a lot of blind corners with little or no shoulder. This scenic route is an an alternative to Interstate 80 to the Bay Area which also runs through these mountains.

The Northern Coast Ranges actually consist of a number of distinct ranges, the northernmost of which (Northern Coast Range-Klamaths) include high elevation alpine peaks reaching up to eight and even over nine thousand feet in elevation, all of which supports  diverse conifer forests and montane ecosystems similar to that of the Sierras. This crest of the Northern Coast Ranges is not only the highest elevation-region of the Pacific Coast Ranges (a unified coastal mountain system extending up into Canada and Alaska) within the lower forty-eight states, but also the highest coastal mountain range anywhere within the lower forty eight states.

The portion visible from Davis is the more inland of two long parallel ranges. The Coast Range in its entirety runs 600 miles from the southern end of the sibling Klamath Mountains in Oregon to the southern Santa Barbara area. San Francisco Bay marks a rough division between the northern and southern portions of the Coastal Range. Just east of the San Francisco Bay rises lone Mount Diablo, a sight which is visible from Davis when not blocked by clouds or hazy skies. It's part of the Southern Coast Range.

Many Adventures Outside of Davis can be found in the Northern Coast Range.