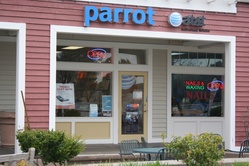 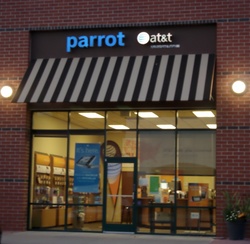 Parrot Cellular was a company that had 2 locations in Davis. Both locations had big AT&T signs so they are hard to miss. The company changed their name from "Parrot Cellular" to "Parrot ATT" several years ago. They sold AT&T cellular phones, AT&T U-Verse, AT&T DSL, Dish Network, and AT&T home phone service. UC Davis students also received 15% off their monthly bill.

The wait in the store was typically very short if you had to wait at all.

Now that AT&T U-Verse is available widely in Davis you could have gone there for fiber optic TV, internet, and home phone service. They worked with you to pick your package and get you as many promotional deals as possible. The South Davis location had a live TV with U-Verse for you to look at.

Parrot Cellular used to have a Cingular and Pacific Bell Wireless branded store at University Mall in the space that later became Gamestop. 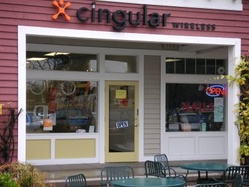 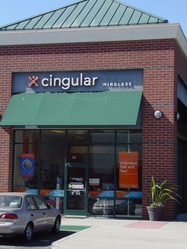 2008-09-28 12:37:30   Some employees (at least at the South Davis office) need to learn what "customer service" means. Example: I entered the office (I was the ONLY customer) and said "hi". All 4 employees were extremely slow on the uptake and did not respond until one of them said "hi". Then a few others responded. One was on the phone with what sounded to be a friend. NONE of them said "may I help you". They gave me the impression that they suffer from extreme laziness and apathy...very sad. Also, they need to change their sign for the Sunday hours. It reads that it opens at 11:00, but no one was there today (9/28) at 11:30 when I waited. I gave up finally. —G.L.

2008-10-06 18:03:53   I walked in to the store located next to Rite Aid, highly flustered from receiving horrible service at a previous location I had gone to in Davis. The associates were knowledgable and very willing to help me with all my needs and answer any questions I had. In regards to the post below, I did experience a slight pause when I first walked into the store between the employees, but an associate promptly greeted me and not only did they help me, but other associates helped assist me while I was there as well. Overall, I was pleased with the customer service I received and would recommend it in the future. I walked out satisfied with my new phone and they even filled out the rebate for me! —SaraTarro

2009-01-11 12:15:03   I've been to Parrot Cellular 3 times and experienced great customer service each time! Once I went in because I had lost the cell phone charger that had come with my phone and they gave me a new one they had lying around for free! They always call AT&T for you to see what kind of upgrade/rebate is available. Another time I came in to buy a new phone but when they found out I wasn't eligible for an upgrade, they suggested I buy a cheaper phone from somewhere else to save money! I've had nothing but positive experiences there. —BethK

2009-01-11 22:18:28   I have always received very quality customer service the the N. Davis store. They are very knowledgeable and helpful. Picking out a new phone with them wasn't a hassle at all. —JeffPitel

2009-09-22 13:04:44   I went in yesterday (the Marketplace one in North Davis) to find a good deal to replace my old phone, and everyone in the store was wonderful!! All 3 employees worked together to help me find what I was looking for, rather than just make a sale. They really went out of their way to get me the best deal possible, and were very friendly and helpful. I would recommend going here if you want great customer service and good deals without leaving feeling like you just got jipped. Customer service was excellent and I left very satisfied as a customer. Thanks guys! —ucdgirl17

2009-10-25 20:19:28   Don't let these guys talk you into buying any extra accessories. You can usually find them at rite aid for half the price, or even better, amazon.com for even less. I was talked into spending $20 on a cover for my new phone which was bulky and ugly, but they insisted it was the only one available for my phone. I found a way better one on amazon later for 22 cents, $2 shipping. I can't return the $20 case because it's already been opened :( Always shop around before buying accessories from these guys no matter how much they say you need to buy it now and here and for however much they are selling it for. —jlbernst

2010-10-04 18:51:59   Wow... I've been trying to hand these guys my money for 2 weeks. I left my info with one person, she was going to check if I was in the coverage area. 4 days later, I haven't heard back, so I call in. There's laughter and talking in the background, and I'm asked to call back in 15 minutes. I call back, and— surprise!— unless I can give them the name of the representative I talked to, they have no way of checking on their progress re: my request. I gave them my name, number, email address, physical address, the type of operating system I use, my SOCIAL SECURITY NUMBER— and apparently they have no way of tracking me down except by the name of the person I talked to?? Really? He helpfully offered to leave a note. After I didn't hear back, I called again the next day, and was asked "who did you talk to the first day?" No one got the note. So I asked them to just go through the process again— to just sign me up to check on whether or not we'll get service. He said he would, but didn't take down any of my information... it's 2 and a half weeks later. If this is how they treat me when I'm trying to give them money, I'm not sure I want to know what it's like when I am stuck in a contract with them. —AndrewWaymire

2011-01-12 08:57:47   Early January I tried returning an item to the N. Parrot Cellular and they seemed to be in a pissy mood with me. The women referred me to as "dude" and the general manager seemed no help as well. Frustrated, I left and went to the other location and received extraordinary costumer service. All three employees at the South location were so helpful. I would have returned to the North Davis location but she didn't address me professionally, nor helped me further. Because the North location is close to home, I'll be sure to revisit, but they best be straight and proper when I return. —dmawright

2011-07-27 16:19:30   I'm a former employee whose worked at both stores in Davis and other stores in Northern California. As someone who worked there for two years, I can honestly say that most employees at these locations are truly terrific. They genuinely do want to help customers. I don't have any incentive in saying all these nice things about them, except that it's the honest truth.

On Cell Phones: Some employees are techies, some aren't. But everyone is more than adequately knowledgeable to help you pick the right phone. Especially smartphones, they know the pros and cons of each model. It's better to talk to a person than to compare online reviews written months apart. Need a second opinion? Ask another employee; they don't always agree but will always be glad to chime in. If they have a suggestion to save you money on your bill, take it. They're just trying to help you out. And often they remove unwanted items off your bill that other stores tack on without telling you.

On Home Internet/ Television / Phone: More times than I can count, they have bent over backwards to make sure customers were getting the best deal and the right solution. There's often a lot of behind-the-scenes work that customers don't see involving calls to AT&T's dreaded back-end and customer service. Sometimes there are odd situations as seen in the comments above where its hard for the stores to get information from the installers or other technical departments; and in those times the employees here will say "We'll figure this out for you" instead of the much easier "Nope sorry we can't help you"; sometimes in these difficult situations customers get frustrated but the employees are actually working 10x harder to resolve them. Seriously get AT&T U-verse. Bundles are priced around the same as Xfinity, but the technology is a whole lot newer and more reliable. Comcast's wiring in Davis is pretty old. The reason Comcast changed its name to Xfinity is because Verizon and AT&T came out with their fiber-optic products while Comcast stayed the same.

Seriously nice people work at these stores. I can't say the same for some workers at other stores in town. Often I had to call and complain to fix problems caused at other AT&T dealers. —hanknguyen

2011-10-14 13:53:59   I actually came to this page today seeing if Hank still works here. Hank was the person who helped me get an iPhone 4 and Blackberry around the iPhone 4 launch time. He was extremely helpful and even showed me the advantage of AT&T vs. Verizon and iPhone vs. Android phones. He was not biased at all even though he works for AT&T. He almost convinced me that Verizon was a better company actually! But since I wanted the iPhone 4, I stuck with AT&T. Two months later, on a trip to New York, I lost my iPhone 4, again Hank was working and was extremely helpful in helping me set up my new phone that I had to get. He has always tried to get me the best price and best deal for my cellphones. He briefly chatted about DSL/TV service but still ended up sticking with Comcast. Each time I'm in the South Davis store, all the employees has always been helpful and worked together as a team when they didn't know the answer to a question. However, I do remember one employee that did look grumpy the whole time I was in the store, maybe she was having a bad day? Regardless, it's sad to see that Hank is now a former employee as I was going to give him a call to chat about the iPhone 4s, however, I'm sure he's moved on to bigger, better things in life. Hank, thanks for your help the past two years on helping me set up my phones and helping me grab the best deal possible! —Jackie

2012-03-29 19:58:45   I highly recommend the Parrot location in North Davis at the Marketplace Shopping Center. I broke my old phone, and after a little researching on what smartphones I was interested in I decided to try out Parrot. I decided to try Parrot after having bad customer service experience at the AT&T store in downtown Davis. The staff at Parrot were incredibly knowledgeable and respectful. And most importantly, they gave me options!!! Which is important for someone with a budget. I was so impressed that they took the time to get me started and showing me price differences. They offer a great insurance price for phones that is much more affordable than AT&Ts. In addition, they took the time to go over all the details of my new plan and features. And synced my phone to my gmail account. They offered way more service than I expected, and made me feel comfortable. I am so thankful for Ivan and Raj for their excellent customer service. And I am very satisfied with my experience there. Definitely try out Parrot at the North Davis location. —MelannieLavarias