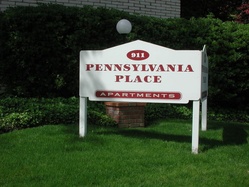 Pennsylvania Place Apartments are tucked in at the intersection of 8th and the train tracks. They have one- ($1,250) and two-bedroom apartments. 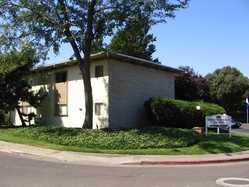 The Pennsylvania Place Apartments are located by the corner of 8th and J streets. 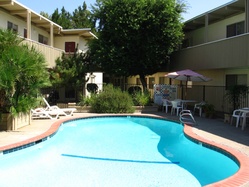 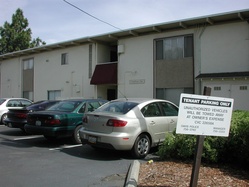 Tenants get a parking lot complete with scary warning sign.

2008-01-29 15:34:43   Lived there during the 2006-2007 year. Gotta agree with cognac above. Peaceful living, and the rooms are indeed huge. Fairly low rent for the space you get, and the apartments are within walking distance of the downtown area as well as the Dollar Tree store. Parking space on the street was never a problem either (I could always find a spot within the line of sight of my bedroom or kitchen window) since most of the buildings in that area are single family homes. Also, the train tracks rarely produced any noticeable noise. Maintenance response times were also relatively fast, since the team checks and addresses the requests themselves whenever the manager is not there. —PaulAmnuaypayoat

2008-02-14 12:10:39   I lived here in the 2006-2007 school year and my girlfriend lives here now. The rooms are really good sized, the rent is cheap, the management is great (Barbara is the nicest manager ever!) and the maintenance is fast. The only drawbacks are, no dishwashers and the built in furniture differs by apartment. The model unit had built in desks but the unit I moved into (#12) had a built in bookshelf in one room and a built in dresser in the other. No biggie, but make sure you check out what furniture you actually need before moving in. Also, the railroad tracks are literally 10 feet from the parking lot, so if your window is open, the trains can get loud during the day. Then again, my window faces the parking lot. Apartments on the other side of the complex probably have no problem at all. —William.Peacock

2011-02-18 13:33:41   So like everyone said the complex is not that bad. Upsides it is typically not loud, small complex, and neighbors do keep to themselves. However, if you need work done Billy is really slow and sometimes never actually fixes what you need fixed. The manager Barbara is really nice to people but, does not address concerns unless they are beneficial to her and she is rarely onsite. The place is spacious inside, but everything is old and when they replace something with "new stuff" it may not actually include "new". There is built in furniture, but it limits wall space for your own furniture. The noise from side to side apartments is non-existant, but a couple people downstairs say that the up down noise is ridiculous and goes unaddressed by management. I only know that having to go up and down the stairs all the time is annoying especially with groceries and laundry. Oh, they say no dogs, but they only turned away a gay couple with a dog, four people upstairs have them and five people downstairs have dogs so that is a lie, poor gay couple. Oh yeah and the noise and apartment smells lingers in the central courtyard so it is hard to keep the windows open in the summer. Our neighbors have like 8 people living with them so I feel bad for the people downstairs not to mention a bunch of people upstairs have gyms and stairmasters and kids so I assume it gets pretty loud. There is a lot of gossip here too, the manager tells your business to people in the complex, which if you don't want people to know you shouldn't say it to strangers, but still. Overall, it is an ok place to live if you are upstairs, I don't think I'd be in a downstairs unit, but hey it is Davis little attention is given to renters. Laundry is 2.50 for 1 load wash and dry I usually spend $40 a month on it. 1 parking permit per apartment. The pool makes a loud noise sometimes too. Hope this helps future renters! —LindaHT

2011-03-09 07:39:39   I have lived at Pennsylvania Place Apartments for over six years. I have only good things to say about it. I know the property manager, the maintenance person, and the owners by character and to some extent personally. This is not a newer property with fancy exercise equipment. Rather, things are handled in a personal manner, in a prompt and reasonable fashion. It might be what you want. —RichardHennies

2011-03-18 12:56:13   the rents are $950 for 2bdroom for 2010-0211; one bedrooms are $850. It is a small complex of 28 units and is usually quiet. The most adults in an apartment are 3. I know for a fact that there have never been dogs allowed; and no dogs living there. Cats are ok and there are several, mostly stay inside. Manager Barbara is happy to come for an appointment, but is only there on Mondays and Thursdays. Place in general is well-kept. —JanKeith

2011-06-16 23:06:34   I live in an apartment in J Street and the trains hook together in the morning right outside my window.. It's REALLY loud... I've talked to people who also live on J street but closer to downtown... does anyone who has lived here have anything to say about how loud the train is? I don't mind the sound of it going by.. it's the slamming them together at 8 AM that I can't stand. —KarinaSnapp

2012-06-14 21:37:20   My two years interaction with Barbara and the Pennsylvania place management has been most enjoyable. However, Pennsylvania Place was recently put on the real estate market and sold to a commercial apartment real estate organization (Barco). My experience with the new management has really left a bitter taste in my mouth. The new apartment manger “Glen” is somewhat of a schlemiel. I truly believe his new strategy to generate revenue is going to consist of nickel and diming the current residents. I recently moved from Pennsylvania Place and my apartment went under complete renovation shortly after. Glen took upon himself to charge me 15.00 for cleaning. The 15.00 cleaning charge was not the driving force behind this review however. My rant is because of a bogus couch removal charge of 100.00. Glen charged me 100.00 for “removal and disposal” of a couch. The problem I had with this charge was I removed and disposed of the couch myself the day of the move out. Furthermore, no one from the Barco organization notified me of the charge. I found out when I got my deposit in the mail. This new management may conduct significant repairs to the apartment building to make it look more aesthetically pleasing. However, they are going to systematically run the moral of the residents down into the ground.

2012-07-05 15:14:35   I've lived at Pennsylvania Place for almost two years. I had a wonderful experience here until the new management (Baco Reality corp) took over. The main appeal, cheap rent, has increased and is now more comparable to other apartments in Davis. On top of this, the new management is absolutely abysmal. Donna, the manager, is very fickle and unapproachable. Due to the July 4th holiday and their lack of communication with residents, I was charged a late fee for rent — I have NEVER payed rent late before and I tried to get them rent early; however, the new management is split between 3 other complexes in Davis and is almost non-existent at Pennsylvania. They were not apologetic about the "secret" (I say secret because it was not made public knowledge) changes and charged me a late fee anyway. Overall, the management is spread too thin and does not adequately take care of their residents. It also doesn't help that the manager has a very abrasive disposition. I'm trying to give them the benefit of the doubt but they are not doing anything to save face. I would not recommend anyone rent from either University Square, I St, or Pennsylvania Place under the current management. There are far too many places in Davis competing for residents for anyone to have to deal with lousy management. I will still be here another year (tied down to a lease that was signed before the new management took over) and am hoping for a positive change. The reasons why I could tolerate the loud trains and adolescent children running around crying and playing (cheap rent, friendly and helpful management) are gone. I would never recommend renting here at it's current state. —ChanS

2012-07-09 15:20:18   I've lived here for over a year. I completely agree with the unapproachable new managers. I've talked to them twice - once when I saw them around the complex and once when I called about the new windows they were putting in. The first time we barely even received a "Hello," back. The second time they gave me completely wrong information on the phone (I had asked them when the window crew would be coming, and was told later the same day. Turns out they couldn't make it until about a week later). But, they have done an okay job communicating in general - notes left by our apartment doors are common. However, one of the reasons I decided to live here was due to the on site and friendly management. I don't understand why we can't pay rent at our on site office, which is frequented by management anyway? Also, they had new office times posted for our site office as well, but they took them down shortly after, meaning we have to go to a different complex completely to even talk to them in person. I don't even know when their other office is open, since I would have to go over there to find out (their office is at University Square). I don't have enough negative experiences to condemn them, so hopefully things will get better. I do wish they'd kept Kenny (our old manager after Barbara) as our manager though. —Adalwolf

2012-12-06 10:51:35   They have a guy who walks around with a leaf blower. It's extremely loud. Most of the time he's just walking around making noise and kicking up dirt into the air because there aren't any leaves. This goes on for hours. I live nearby and It's hard to get work done when this is going on. —TheLoneConservative

2014-09-18 23:29:49   DO NOT MOVE IN HERE! There is no management. So people are left to do whatever they want. Issue with noise at night? Cops are your only option. There are people across from us who think the common area is their own white trash front yard. We were told we couldn't have anything out front, and yet these people are allowed to have all their trash all over the place. They say no pets but there are cats and dogs. everywhere. And rent is not cheap either. Everyone SLAMS their doors when coming or going. It's completely ridiculous. Complaints about management are completely justified. They just wanna collect your money and won't even call you back if you ask about something. —UnhappyTenant