Griffin, Joe, and Jaizi (left to right) in a photo collage.

As self-proclaimed rivals of ChoadBot, the Playboy Millionaires brought the the fog machine to the scene. Griffin Walker, who joined Jazi and Joe shortly after the band was formed, was a cool & collected addition to this rockin' powerhouse. Dan Glendening also performed with the band at live shows when he plays the fog machine.

The Playboy Millionaires played their last show on September 24, 2005 at Delta of Venus. 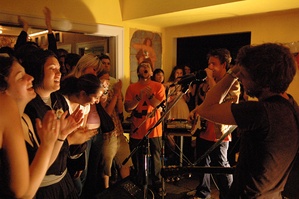 The Playboy Millionaires get a good cheer before playing their last song together.

Guitarist/vocalist Joe Finkel stomped his boots while drummer Jaizi Abedania bangs on a can of beef menudo (no lie!).

Jaizi, Joe, and Griffin are all incredibly hot.

Griffin gives Joe a smile at a CoHo show. 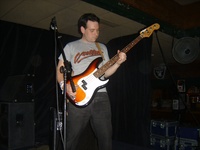 Griffin holding up the bass line 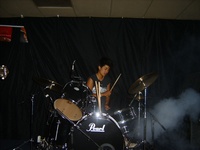 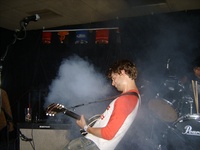 Joe rocking out with a guitar solo 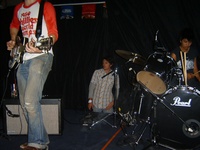 Dan behind the stage with the fog machine