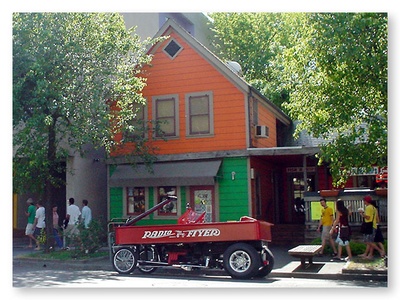 Someone has gone to great lengths to build a very custom car based on a Radio Flyer red wagon. It can been seen driving around Davis in good weather and is occasionally featured on television shows (it was on the Discovery Channel's 2004-05-03 "Monster Nation"). It was built in 1996 from a 1923 Ford T-bucket by Davis resident Art Baker, his cousin Bob Castaneda, and friends for $4000. It is owned by Art Baker and his cousin Bob Castaneda. It's named "Radio Flyer", although keen observers will note that it actually says "Radio Fiyer" on the side.

JulieB notes that the owner of this car is her neighbor and says he's a very nice guy. AngelaGerould seconds that, saying "Arty is one of the nicest guys you will ever meet. He doesn't just drive freshman girls around, he drives his friends and people that ask him to take them to events or even just go for a quick trip around the block. And I am impressed with his car." kayejobst notes that, "both Art and Bob have put their heart in this car."

Like the Little Green Electric Car, once you see it you won't soon forget the experience.

The Radio Flyer car was featured in a photo on autoblog.com on August 15th, 2009 after it participated in the Concours d'LeMons show in Monterey, CA.

SteveDavison was disappointed to see that you don't steer with the handle. When he was a kid he put an electric motor on his.

A similar "Radio Flyer car" was constructed by a retired couple in Alaska. Video footage can be found "here". 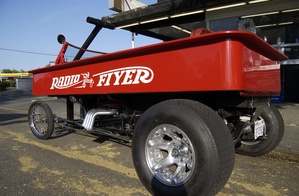 2012-12-08 11:25:38   We noticed in the Geek Daddy Video this morning that the couples wore no seat belts and there was no way to get in and out of the vehicle. We assumed the step stool was portable and probably under the portable heater they showed us. Have you had any offers to make these wagons for anyone? We seniors need them quick before we move on. Rev. Marvin E. and Connie Purser, ages 74 and 75 respectively. —marvinpurser