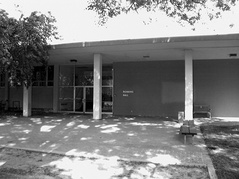 Robbins Hall houses the High-Throughput Genomics facility and the Parsons Foundation Transformation, and the Weed Science group, with faculty, extension, USDA and Nature Conservancy staff all housed here. Until the building of the Sciences Laboratory Building, most of the Plant Sciences and Weed Science courses were taught here, including labs for BIS 1C. Now replaced by newer labs, the classrooms are being renovated for research space, although some Workload classes are still taught here, and the Botany Club meets here every other week.

Robbins also has a bizarre Elevator Room at the south end. The north end also has an elevator, because the second story isn't connected between Robbins' north and south wings. 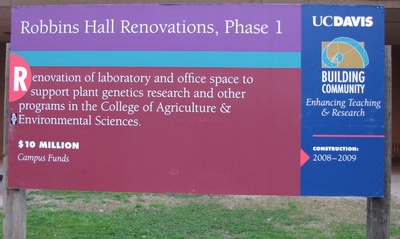 Sign announcing planned renovation Renovations began in early Summer 2007, and will go in patches for the next five years...

There are botany-themed mosaics now permanently installed on some of the columns on the building's west face. They were designed by local school children after graduate students taught botany in their classes. They look like they could be the work of Donna Billick. (I'll have to check when I'm on campus next...)