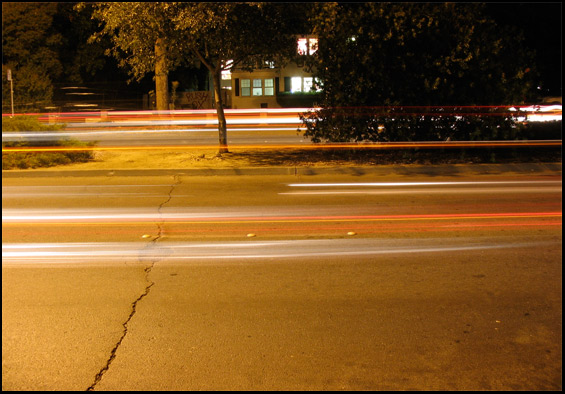 Russell Boulevard stretches along most of Davis. When Russell Blvd. passes B St. heading East, it becomes 5th St. Russell and 5th St. combine to make the most important east-west thoroughfare in Davis. Russell skates along the northern border of Campus, and is also home to Frat Row.

A long stretch of Russell in West Davis is the picturesque Avenue of Trees. If you keep driving/walking/biking west down Russell you will pass by Cactus Corners and eventually end up in Winters, where Russell becomes County Road 128. There, the road crosses into Napa County and becomes Capell Valley Road, passing along Lake Berryessa. At some point, you can do something or other and end up in Napa at which point you have gone way the hell past the bounds of this wiki and you're on your own, baby. (See Napa.) Slightly less than half way to Winters, Russell provides a link between County Road 95 and 95a.

Russell is part of the historic Highway 40, also known as the Lincoln Highway, which is the nation's first transcontinental highway. There is a Lincoln Highway marker on the southern side of Russell near Arthur Street. U.S. 40 continues westward at Road 128 and eastward at B Street.

Russell Blvd. is named after William Ogburn Russell, Sr., a prominent citizen and Yolo County supervisor in the early 1900s. He was a member of the Russell family who owned and operated the Russell Ranch, west of Davis. Russell Ranch is named for the pioneer farming family of Francis E. Russell, whose daughter Cornelia Ellen married William S. Enos, one of the series of owners of the Dresbach-Hunt-Boyer House on 2nd St. in downtown Davis.

As a October 2011, it is apparently legal to drive 55 MPH even though the posted speed limit is 35 MPH on the portion of Russell between Pedrick Road to Lake Boulevard. See this article in the Enterprise. It is likely that this will not stay this way, and it is not really safe to do in the first place given the semi residential nature of this area, so drive fast at your own risk. 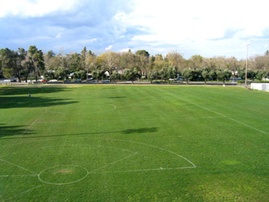 View of Frat Row from atop parking structure 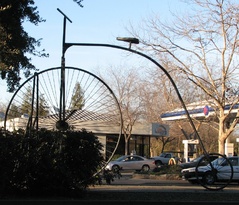 A penny-farthing bicycle statue on Russell 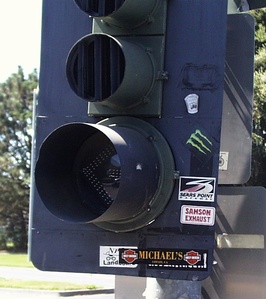 2008-06-17 01:25:41   Does anybody know if fifth and russell used to be separate? I ask because I always assumed this to be true based on the way they look shoehorned together on satellite photos, but I realized lately I don't really know for sure. —JoePomidor

2008-08-09 11:11:22   I think that yes, 5th and Russell used to be separate, according to some historic maps I saw of central Davis. Russell would 'T' into B Street just south of where 5th would do the same. I don't know when they were finally linked, though. —AliPezeshkpour

2012-01-10 23:59:20   Crossing Russell at California Avenue is often dangerous, as cars do not see pedestrians, and pedestrians do not wait for the traffic to stop. Please be kind, and slow down on approach to this intersection. If the yellow light is flashing, yield to those in the crosswalk. —ari-p

2012-10-19 14:14:19   I have seen something on Russel Boulevard that is in need of fixing: electric cables hanging too low. I noticed the last couple of days when I was biking there, I have made some photos. On a certain track, the cables are right above your head.