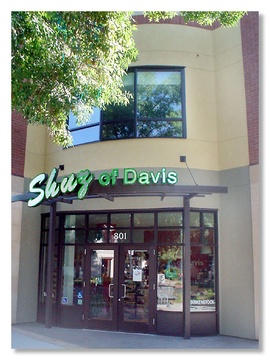 Shuz was a shoe store located in downtown Davis, specializing in European comfort and walking shoes such as Sanita (the maker of Dansko for over 15 years), Beautifeel, 1803, Joseph Seibel (for men), Mephisto, Reiker, Ahnu, Pikolino, Think/Finn Comfort, Gabor, Birkenstock, and others, as well as socks, handbags, & shoe accessories. The business had been in Davis for over 30 years.

As the Davisites will tell you, Shuz used to just be Birkenstocks and kids Birkenstocks, before they expanded their selection greatly. Shuz was originally called Birkenstock Plus. It was originally located 129 E Street before moving to 710 2nd Street. Their expanded line of products prompted their renaming and move to their final, much larger location in the Chen Building.

This space was subsequently occupied by Sole Desire, selling similar brands of shoes, but for women only. 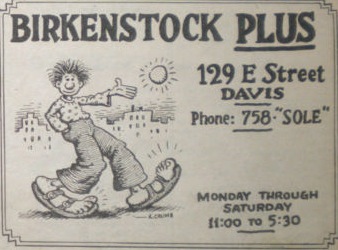 What did you think of Shuz?

2005-07-26 22:35:52   I can't stand the name either. I work in the same building and I always think it is funny seeing the sandals in the window that are advertised as waterproof. —NickSchmalenberger

2006-11-02 17:13:27   Prices are pretty much set, but they do offer ten to fifteen percent off coupons in the Green machine and newspaper ads. Also, they have sales about once a season. (I work there, could you tell?) —ClaireImpens

2007-07-29 13:43:15   Great service. The prices are retail, but there's usually a 10% off coupon in the green machine. I like to try shoes on and support local business. For those who try the shoes on at the store then buy cheaper online, I'll point out that without business the store won't be around so you can try on those shoes. It's worth paying for the service. —rachelss

2008-03-15 17:43:20   Great service! I got a pair of shoes there that ended up being uncomfortable. I had bought that brand before, so I didn't really try them on in the store as much as I should have. I was worried about taking them back to Shuz because I had managed to lose the receipt, but they took them back with no hassle for the full price I paid and helped me find a more comfortable brand. Very nice. :) —HeatherBeck

2010-02-11 08:13:31   Unique quality products from countries other then China. WOW! The name is just fine and judging from past comments we are in the company of a bunch of people with no sense of humor. This is a fine local business which has been in town for many years and saves trips to Walnut Creek and San Francisco. So you outlet shoppers can look down your noses at them but class will always tell Lucy you don't lack culture you lack money. —RENEERAVIOL

23 February, 2010: I have a rare negative comment about the staff at this store. About half of them are competent, pleasant people, the other are looking down their noses at me or are apparently customer-careless stoners. When my wife called today to ask if she'd left her credit card there, she was treated to a surfer-dude's "errr..." response. Only after her directly telling him to go and check did he respond in anything like a customer-focused way.

One of the few things that keeps me shopping locally rather than on the internet is that I can get actual personal service. I don't shop at places where I have to tell the staff to do their jobs, so Shuz has gone down in my estimation, and they need to make certain that their staff are alert to customer needs.

2010-03-22 15:52:58   warning- do NOT ever order shoes from here.. your "they will be here in 7 to 10 days" turns into 3+ weeks and when you ask about them you get "well the warehouse said they shipped, that is all I know"...and another thing you have to ask them to call and find out where and when your shoes will be in..pathetic custom service.. so next time you need a new pair of birkenstocks I suggest ordering online and not from the Shuz of Davis.. I know I will not be back...

2010-05-03 14:44:22   I really wanted to give them my business, but after going in three times and them not having anything in my size, I had to order on-line from someone else. I asked if they could order for me, and they couldn't do it. They also didn't offer to take my name and give me a call when something came in. I found it really frustrating, especially since I wanted to purchase locally ... oh well. —SallyCP

2010-06-05 11:40:22   I went in to try some Birkenstocks (never have before). The young woman who served me (the only person on the floor when I arrived) was unimpressive: My few specific, factual questions about Birkenstocks were met with neglegently capricious answers — she feigned attentiveness by affirming every postulate I made, regardless of it being the contradiction of a previous postulate. So I left rather unenlightened about a famously complicated sandal, and in search of another store to fulfill my buying prerequisites. A contrast to the fairly rigorous and at least genuine service I received at Fleet Feet. —GregPThrasher

A heel spur spurred a stop into Shuz earlier today, as the waving sign, "1 for 49, 2 for 80" clearance sale gave me a sliver of hope for a quick, possibly affordable remedy for pain. Instead, I have a shiver of regret.

I can not believe the outrageous lie that was told to me to make a sale. I am a lover of flipflops and running around barefoot. Since hiking five miles in said flipflops, what started as an aggravated ankle, shifted into full on heel pain. Shuz carries those high dollar, high podiatrist friendly, some even trendy shoes. I found a pair of Merrell Rosarita flipflops that had support and comfort built in. I asked the young woman what the original price was and she told me 120 dollars. Not knowing the brand, I didn't think to disbelieve what she was telling me. I quickly tried to find another pair of shoes that I might like so I could feel good about getting the best savings out of the whole deal. I found a pair that were, "eyh" but okay, who cares right... 2 for 80 and I already have a great sale on the first pair.

Wrong. But I didn't find out until AFTER I left the store. The woman told me that the original price of the other pair of shoes was 70 dollars. Sure, nice, fine. She didn't repeat the original price of the Merrells, I offered a bit of plastic and a signature, declined a bag and went on my way. What comes next is almost laughable, if I didn't feel so stupid, and taken for a ride by Shuz, Davis.

My receipt (all sale items are sale is final) lists a pair of shoes (not my Merrells) with the original price 170, yes 170 dollars, marked down to 40 and the other 70 dollar shoe, marked down to 40. I may have been born ten minutes ago to think a pair of flip flops could have an original price of 120, but sure shooting, I am not going to brag that they cost 170! Not only that, I looked them up online and they run for sixty something dollars.

So. To sell me two pairs of shoes, the woman lies to me about the original price and has to come up with an even pricier shoe to ring up so that I am none the wiser and walk away thinking I have had the ultimate downtown davis local shopping experience.

All I can say is.... I don't know what to say. I am very disappointed in Shuz of Davis... —Chrissye

2010-09-23 17:36:33   This is literally one of the worst places to shop. I went in the other day looking for shoes and I found this floral sanita clogs I really Liked. I told the lady that was helping me I believe her name is Chelsea that I needed to be back because I had not brought enough money. She said she would hold them for me until the end of the day. When I cam back with my friend and asked for the shoes I had placed on hold, Chelsea came out and told me her manager had sold them. I was mortified. —DeBoRaH21

2010-12-21 20:42:01   My wife and I try to shop locally whenever possible. We've shopped at Shuz for years and we've always been happy with their service and selection. But we've run into one sore spot - they have a 7 DAY RETURN POLICY! Thankfully, it's possible to exchange for store credit that can be used later. We've also learned to be careful when looking at sale items that often come with a NO RETURN policy. —BHolmes

I took some birkenstocks to the Davis Shuz store to get refurbished. I was told they'd be ready in 2-3 weeks . But one of their employees abandoned them and so it took months before they were ready. No big deal, I understand they can't help when someone leaves, and it was cold out anyway so I would not need them. When I got around to picking them up, I was told they might dry out by the time it got warm out and I might need to apply more protectant to the cork. So to prevent the drying, I put them in ziploc bags and set them under my bed. A couple months later, it started getting warm out so I pulled them out and inspected them. I had some concerns about the separation between the cork and the rubber bottom. Also the straps did not tuck in as they had before. I called to ask about whether it might be possible to get a store credit and just purchase a new pair through their store (for which I would voluntarily pay the $50 difference). I was told to call the manager Jennifer at the Shuz of Rockridge store and she could tell me the deal. So I called up and woah, here is where the sh*% flew.

I’ve rarely talked to someone at a business who was so combative in her tone. I asked for Jennifer, and she said which one, one doesn’t work here anymore. I said the manager. She said, well I’m the manager, and my name is JEN. Oh, sorry, JEN, I was just using the name given by another employee and the name on the receipt I had from our earlier transaction. When I went on to explain my situation, she continued to make it sound like the issues were my fault. She said, you shouldn’t have put them in the bags. How does that affect them? I was just trying to keep them from drying out. I didn’t leave them near a heat source or out in the sun and create some sort of greenhouse effect. They were under my bed. They don’t somehow generate their own heat that gets trapped in the bag. The whole conversation continued like this on her side, combative…like she thought she was Florence on an episode of The Jeffersons trying to put George in his place. After the abuse, she even had the audacity to suggest that they’d be happy to sell me a new pair of Birkenstocks at full price through their store.

No, thank you, I don’t like to pay for verbal abuse when I’m only asking about possible remedy or clarification about an issue. Avoid.