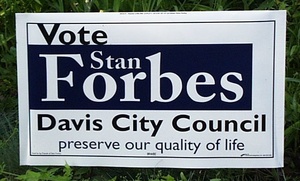 Stan Forbes served on the City Council from 4/20/1996 to 6/20/2000. He ran for City Council three more times, each time unsuccessfully, in 2000, 2004 and again in 2006. Prior to that he served as Trustee for the Davis JUSD School Board from 1985 to 1996. Stan splits his time between almond farming and running the Avid Reader in Sacramento. His ex-wife, Alzada Knickerbocker, owns the Avid Reader bookstore in downtown Davis.

In February 2004 Forbes suggested students could move to Woodland to find affordable housing.

Stan was a registered Republican until April 26th, 2006 according to James Schwab. Currently Forbes is registered as "decline to state."