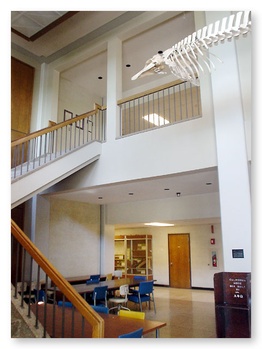 Storer Hall was named for Tracy Irwin Storer [1889-1973] and is connected to the end of Hutchison Hall, next to the Kleiber Lecture Hall. It was built in 1968. Tracy Storer founded the Department of Zoology at UC Davis in 1923. Storer was born in San Francisco on August 17, 1889, and completed his entire education in the Bay Area, from Oakland high schools to entering UC Berkeley in 1908; there he majored in zoology, receiving his baccalaureate in 1912, a masters in 1913, and a PhD in 1921. In 1923, Storer joined UC Davis as an assistant professor of zoology and assistant zoologist in the Experiment Station of the College of Agriculture. Not only did he found the Department of Zoology on campus, but was its sole faculty member until the program expanded beginning in 1935. By 1956 he ascended to professor emeritus followed by conferral of an honorary law degree in 1960. In 1969 the UC Davis zoology building was named after him. Incidentally, Tracy Storer was a leader in the founding of Sigma Xi (the scientific research society, not to be confused with the social frat) and was the first president of the UC Davis chapter.

Storer Hall houses the Evolution and Ecology department. The first floor has fish tanks containing marine life from Bodega Marine Laboratory and changes every few months. A sign on the lobster tank says it is from waters too polluted to eat it but it wasn't true — they just put the sign up so no one would steal it. JeffSpeckles used to help maintain the tanks. The third floor has live boas in a glass tank, near the elevator. The sixth floor balcony of Storer Hall is a great place to watch the sunset over Davis. It also hosts the CLIMB program, an undergraduate research program in mathematical biology. These tanks are where the octopus was kept

The general campus knows this building mostly because it houses 1322 Storer, a general assignment lecture hall.

view from Physics and Geology

2007-02-17 03:26:57   It was a California two spot octopus, latin name Octopus bimaculatus. They only live about 18 months in the wild. It died a long long time ago due to natural causes. The ink itself wouldn't have killed it, although we put up lots of signs that said it would to keep people from tapping on the tank. —JeffSpeckles